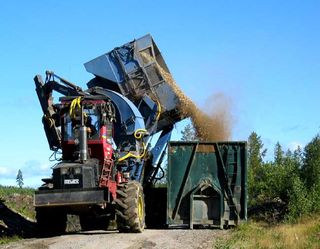 At a Scandinavian site, a truck collects chipped wood residue left after forest harvest for use as bio-fuel in electricity generation

It has been nearly a million years since early humans first controlled fire to heat their caves and broil meat from hairy beasts. Now, after fits and starts in the environmental acceptability of this technology, steps are being made to burn wood as a "green" energy source to run everything from furnaces to toasters.

Only a few decades after burning wood waste produced at sawmills became taboo in many parts of the United States, the left over bits from the lumber industry - tree tops, limbs, and bark - are being efficiently burned and converted to energy.

Some U.S. forest-product manufacturing plants already burn wood residue in steam boilers. The steam drives turbines that generate part of the energy required to run the plant. And some pulp mills use what is called "black liquor," a lignin-rich residue left over when making paper, as a source of heat and electricity.

While burning wood refuse as a bio-fuel isn't widespread in the United States, countries in Europe have been using this source of energy successfully for a number of years. The big difference in Europe is that the plants are not using just on-site industrial residues for energy; their main source of biomass is recycled wood from the harvest site.

"In Sweden, they're already bundling up what we're leaving in the forest after a timber harvest and using it as biofuel," said Darwin Foster, program leader at the Texas Agricultural Extension Service.

Sawmills can't make anything useful out of the small stuff.

"In the United States and many other countries, tree tops are left behind at the harvested sites," Foster said. "Though the tonnage is huge, these tops are considered "unmerchantable" and are left where they fall to bio-degrade or are burned or chipped to speed up the process."

In the regeneration of biofuel technology, forest biomass is not limited to forest industry plants. As the prices of non-renewable energy sources such as oil continue to climb, residential consumption of biofuel may not be far away, some experts say. One Texas electric company is already generating electricity from wood residues and making it available to residential consumers.

Foster sees bio-fuel from tree waste as a great source of renewable energy. Other energy sources, such as oil and coal, will eventually run out, but forests regrow or can be replanted to provide a source of energy for years to come.

"The potential is huge," he said.

Harvesting tree waste for fuel might also help prevent catastrophic forest fires. Dry, woody debris, typically left behind by loggers, is perfect kindling for a large forest fire once ignited by a dropped cigarette or a lightning strike.

Both the U.S. Forest Service and the National Fire Plan, a cooperative of several federal agencies, promote removal of woody biomass from forests. The Department of Energy is also looking into engineering "fast-growing, air-cleansing hybrid poplars, planted on surplus farmland and cultivated for the energy they can yield," according to an Oak Ridge National Laboratory report.

There are some common concerns about removing wood from a harvest site to be converted to electricity. Burning wood will release carbon dioxide, a greenhouse gas, into the air. And removing leftover bits of trees from the forest could deprive the soil of biodegraded nutrients, which might slow down future re-forestation efforts.

Going against the grain, Foster argues that neither of these issues should be a cause for concern. He says carbon dioxide will be used in photosynthesis by growing trees, and there have been studies showing that the regrowth of forests will not be slowed as long as some of the residues are left behind. In some areas it may be possible to return most of the nutrients, in the form of ash, to the harvest site.