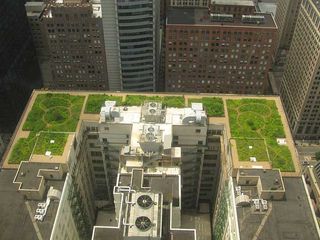 Chicago's City Hall got a green roof in 2001. The project was designed to test various concepts and methods and to test the benefits.
(Image: © Wikipedia Commons)

Green roofs are growing more popular in cities, with the number of green roofs increasing by more than 35 percent from 2007 to 2008 in the United States, representing more than 3.1 million square feet installed last year. In Germany, widely considered the leader in green roofing, some 12 percent of all flat roofs are green, with the German green roof industry growing 10 to 15 percent annually.

“In Stuttgart in Germany, 25 percent of all roofs there are green. It’s just normal. I think we can get to that level here,” said researcher Brad Rowe at Michigan State University, an environmental scientist in East Lansing. “It’s possible to choose plants where you don’t need to water them if you’re in a place like Arizona, if you have the right cactus species, for instance.”

These roofs can reduce heating and air conditioning costs, with Department of Energy simulations projecting they can lead to a roughly 10 percent reduction in natural gas consumption and a 2 percent drop in electricity use for a typical building. Moreover, green roofs last two to three times longer than standard roofs because they are protected from ultraviolet radiation and the extreme fluctuations in temperature that cause roof membranes to deteriorate. They also retain and detain storm water, which could otherwise exacerbate flooding and erosion.

“They can also bring in birds and butterflies, help improve biodiversity,” Rowe said. “And there’s also aesthetics, and how do you put a dollar value on that?”

In addition to soaking up pollution and noise, the plants in green roofs naturally absorb carbon dioxide, the leading greenhouse gas behind global warming. However, nobody had measured the potential impact of green roofs on carbon dioxide levels until now.

Scientists at Michigan State University measured carbon levels in plant and soil samples collected from 13 green roofs in Michigan and Maryland over a two-year period.

The researchers found that replacing traditional roofing materials with green roofs in an urban area the size of Detroit, with a population of about one million, would capture more than 55,000 tons of carbon. That is roughly similar to eliminating a year’s worth of carbon dioxide emitted by 10,000 mid-sized SUVs and trucks.

The challenges green roofs now face in the United States are in the arenas of policy and costs.

“The government should not necessarily mandate them, but it can provide incentives for them, just as they do in Germany and elsewhere,” Rowe told LiveScience. “And green roofs are more expensive, but only initially. Over time, they’re cheaper once you consider their benefits energy-wise. It takes about 11 to 14 years to break even.”

The scientists are scheduled to detail their findings in the October 1 issue of the journal Environmental Science & Technology.