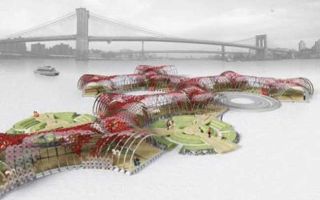 An NJIT architecture professor with an architecture student has designed a network of modular floating docks to harness clean energy for New York City. The proposal was featured this week in Metropolis magazine.
(Image: © Sarah Parsons)

Each dock could generate power off the city's river currents. Three vertical turbines fastened out of sight to the underside of each station would harness the 4 mph currents, with each module generating up to 24 kilowatts of constant energy from the Hudson and East Rivers.

These stations would plug into the conventional piers of the city, extending them into the rivers. They could alleviate the need for conventional power to light the city streets, with each module supporting 350 LED streetlamps.

These docks could eventually get extended further up the rivers to both generate power and increase recreational green space and tidal pools for wildlife, said researchers at the New Jersey Institute of Technology and at GRO Architects in New York. They currently have a provisional patent on the idea.

The designers came up with the concept as an entry for this year's Metropolis Magazine Next Generation Design Competition.

"Since then, a lot of people have come out of the woodwork who put together clean energy deals for cities, or even in some cases developing countries," said researcher Richard Garber at the New Jersey Institute of Technology, co-founder of the firm GRO Architects. Although officials from New York have not contacted the researchers yet, "people from other cities internationally have."

There are already turbines harnessing power off tides in the waters of New York City. The Roosevelt Island Tidal Energy project could generate up to 10 megawatts, enough to power nearly 8,000 homes, according to its developer, New York-based company Verdant Power. However, the new docks that Garber and his colleagues propose could generate a similar amount of energy while creating new public spaces.

"If you think historically, cities developed around waterways based on a need for trade," Garber said. "As trading changed, the need for water as a preexisting requirement for urban development went away. What's funny is that all of a sudden, water can become uber-important again in terms of development."

At the heart of the proposal, the researchers want to reinforce the relationship between the city and its rivers and help reclaim access to its 578 miles of waterfront.

"Many times, you can stand on the corner of 42nd St. and Park Ave. in Manhattan and have no idea you're on an island, with the idea of the waterfront lost," Garber said. "A big picture goal here is that via clean energy, one can heighten awareness of the water."