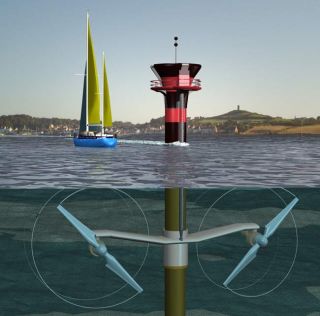 Sloshing back and forth in constant rhythm, the ocean's tides are a predictable source of renewable energy. Hoping to tap into this, the world's largest tidal turbine is set to start generating electricity this month.

The installation of the SeaGen marine current generator was completed this past May in Strangford Lough, a large inlet on the coast of Northern Ireland. The system, designed and built by Marine Current Turbines Ltd., has two rotors that each span 16 meters (52 feet) in diameter.

"The technology is very analogous to wind, except we are doing everything underwater," said Peter Fraenkel, the company's technical director.

The maximum power output of the SeaGen will be 1.2 megawatts — four times more than any other turbine. Operating for roughly 20 hours per day, it is expected to supply 1,000 homes.

Go with the flow and the ebb

The $20 million SeaGen is a single tower, moored to the seafloor a quarter mile (400 meters) from shore. It is designed to catch both the incoming (flow) and outgoing (ebb) tides by rotating its two rotors 180 degrees.

No power is generated during tide changes, as the turbine only works when the water is moving 2 knots (2.3 mph) or more.

The rotor blades are similar to those on wind turbines. That's because the same basic physics applies to wind streams and tidal currents. The big difference is that water is much denser than air, so it puts more stress on tidal system structures.

"The bad news is tidal turbines can't be as big as wind turbines," Fraenkel told LiveScience. "But the good news is that they don't need to be," since water carries more energy per area than air.

As a case in point: a wind turbine would need to be 65 meters (210 feet) in diameter to achieve the same 1.2 megawatts of power as SeaGen.

The other difference with wind is that tidal energy is completely predictable.

"Tides are not driven by weather, but instead by the relative motion of the moon, sun and Earth," Fraenkel explained. "You can predict what the tides will be 20 years ahead, whereas you can't tell if it will be windy."

The site at Strangford Lough was chosen because it has very fast tidal flows that reach up to 8 knots (9 mph).

These strong currents caused some problems during the installation of SeaGen. Likewise, other tidal projects have had difficulty with the unwieldy ocean.

"The whole point is to put these things in the most energetic environments," said Eoin Sweeney, head of the ocean energy development unit of Sustainable Energy Ireland. "By definition, they are going to be tricky places to work."

The Paris-based International Energy Agency has estimated that the global tidal energy potential is around 800 billion kilowatt-hours per year (about 5 percent of current world demand). This is considerably less than the potential of wind and wave energy.

Stand-alone turbines are not the only way to capture tidal energy. In fact, a 240-megawatt tidal barrage has been working in La Rance, France, for over 40 years. It's essentially a large hydroelectric dam that gets its water from the incoming tide.

Although other tidal barrages have been built over the years, they have fallen out of favor because they completely alter the flow of water in what are often sensitive coastal eco-systems.

Turbines are thought to be more environmentally friendly. Even so, there are concerns over the turbine blades "making sushi" out of unsuspecting marine life. Fraenkel thinks this is unlikely since the blade tips move at most 15 meters per second (33 mph), slower than some boats.

Ongoing studies into the environmental impact and long-term reliability of tidal turbines may decide the industry's future.

"We're in a bit of a crystal-ball-gazing period right now," Sweeney said. But he predicts an increase of development over the next five years.