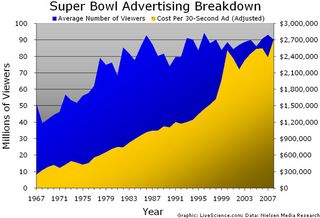 Super Bowl advertising since the first big game in 1967. Although the average numbers watching at any one time (blue) have flattened in recent years, the price of buying TV air time for advertising has continued to increase drastically even when the prices are adjusted for inflation (yellow).
(Image: © Graphic - Dave Mosher, LiveScience.com; Data - Nielsen Media Research)

The Super Bowl is no longer just an annual Sunday affair of guttural cheers and gorging of snack food. It's a "veritable selling season," as one researcher called it, for mega advertisements.

Thirty-five advertisers this year will shell out about $3 million per 30-second television ad — that's $100,000 per second, nearly double the price a decade ago.

So do they pay off?

For companies that create the right ad magic, the answer is a resounding "yes." Their creativity can even boost their stock prices. The right combination, research shows, is a blend of humor and either celebrity appeal or animal antics.

Success also depends on the buzz beyond the Bowl.

Chuck Tomkovick, a marketing professor at the University of Wisconsin-Eau Claire who has researched Super Bowl advertising for more than 10 years, said the buzz surrounding the ads is sufficient to make them wise investments.

"These companies are getting more for their money than just 30 seconds," Tomkovick told LiveScience. "There's an [Internet] following on these ads and they're being publicized way in advance. They get sort of a red carpet treatment for a few weeks."

Super Bowl ads have grown so popular, in fact, that Tomkovick said they're being sold as downloads for handheld devices.

"Also, advertisers sometimes hold video submission or voting contests for their commercials," he said, noting that viewers inevitably log onto company Web sites to participate and leave with a lasting impression.

But does that push viewers to drive away in a featured car, snack on a specific brand of chips, or reach for the best-advertised beer?

"It varies greatly depending on what's being sold," Tomkovick said, but noted that Web-based companies seem to have recently enjoyed a large amount of success.

"GoDaddy dot com, if you believe their press releases, said they have more than doubled their ownership of the [Web hosting] market shares simply by investing in Super Bowl advertising, driving people to their Web site," he said. "I have no reason ... to believe that it's untrue."

Movies also feel the effects: an average of 36 percent more revenue, in fact, if their trailers show during the game. That conclusion stems from a 2004 study Tomkovick co-authored in the Journal of Advertising Research.

"In addition to movies, over-the-counter and pharmaceutical drugs, tech and financial, toys, gadgets and clothing have all done reasonably well," said Tomkovick, who recently completed an unpublished study of the Super Bowl advertising's connection with the stock market.

The new study's findings suggest that companies advertising in the Super Bowl inflate their stock value by 1.3 percent after the game, compared to the shares' values two weeks prior. Not all companies enjoy equal success, however.

"Beverage stocks stay relatively flat, no pun intended, and cars don't do well either," Tomkovick said. "Maybe it's just the time of year that people aren't excited to shop for cars."

Another study investigating the impact of Super Bowl advertising on stock market prices looked at the numbers just before the game and directly after it.

"Companies with well-liked commercials see, on average, a quarter of a percent increase in their stock prices the following Monday," said Kenneth Kim, a finance researcher at UB who recently co-authored the unpublished study. "When you consider that the average market value of a company that airs an ad during the Super Bowl is about $30 billion, it increases their value by roughly $80 million in one day."

Kim said the results, which were accurate more than 75 percent of the time, indicate that airing a well-liked commercial is key; companies that aired dud commercials were just as well off as those that didn't fork over the multi-million dollar sum for Super Bowl ad space.

But what, exactly, makes a killer ad?

A study published in a 2004 issue of the Journal of Sport Management looked at eight years of Super Bowl ads to find out what about them best courted viewers. Co-authored by Scott Kelley of the University of Kentucky, the work also relied on Ad Meter data to find out that the most-liked ads:

Ever fickle, viewers disliked ads with non-celebrity announcers that humorously pitched services without using an animal of some sort.

Ads that appear during the Super Bowl extravaganza have far-reaching effects now, but Peter Orlik, director of Central Michigan University's School of Broadcast and Cinematic Arts, said he anticipates a decline in big-bucks game-day advertising.

"The mushrooming of broadband Internet activity is … lessening the Super Bowl as a 'must have' exposure for marketers," Orlik said. "Advertisers still buying Super Bowl [commercials] are finding more ways to leverage this exposure via other media."

He said "there are indications that key advertisers are finding alternative ways of securing multiple buzz opportunities for the cost of a single Super Bowl placement."

Tomkovick, however, remains unconvinced that an Internet takeover is imminent.

"Internet advertising is still less than 10 percent of a company's [advertising] budget," Tomkovick said, noting that the Internet can complement TV ads by creating buzz. As long as tens of millions of people watch the Super Bowl each year, he said, the bucks keep rolling to TV networks airing the event.

"It's a high stakes, high-profile roll of the dice," he said. "But for many companies it's worth the investment, and its one they'll be willing to pay more for each year."