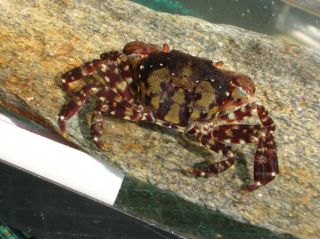 Some 15 years ago, blue mussels knew their enemies and had a rather peaceful life in the New England waters. But when an invasive crab species turned up, the mussels moved quickly to defend themselves against this new predator by thickening their shells.

Such rapid evolutionary response is a "nanosecond" compared with the thousands of years that it normally takes for a species to respond to a predator.

"It's the blending of ecological and evolutionary time," said study co-author Aaren Freeman, a graduate student the University of New Hampshire. "It's an important development in the arms race between these crabs and these mollusks."

Crabs prey on blue mussels by crushing their shells.

The Asian shore crab, Hemigrapsus sanguineus, was introduced to North America in 1988. It arrived in New Jersey and never made it north of mid-coast Maine.

"We wanted to know, how is it that these mollusks can recognize a crab that is historically not present in North America?" Freeman said.

Freeman and colleagues exposed mussels from north and south of the mid-coast Maine region to these crabs. The southern mussels were the only ones to thicken their shells in response, because of their previous contact.

"The mussel's inducible response to H. sanguineus reflects natural selection favoring the recognition of this novel predator through rapid evolution of cue specificity or thresholds," the researchers write in the Aug. 11 issue of the journal Science

The mussels most likely evolved quickly because they are used to being prey to many species in these waters.

"When Hemigrapsus came along the mussels' wheels were well-greased to respond," said co-author James Byers, associate professor of zoology at the university. "That's our best guess."