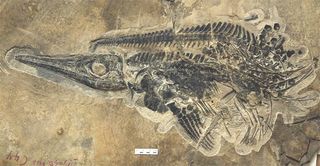 A fossil of the dolphin-bodied marine reptile known as an ichthyosaur, discovered as part of a giant cache of nearly 20,000 fossils in China.
(Image: © Shixue Hu, Chengdu Geological Center in China.)

A giant cache of nearly 20,000 fossil reptiles, shellfish and a host of other prehistoric creatures unearthed from a mountain in China is now revealing how life recovered after the most devastating mass extinction on Earth.

This research could help point out which species might be more or less susceptible to extinction nowadays, and how the world might recover from the damage caused by humanity, scientists added.

Life was nearly completely wiped out approximately 250 million years ago by massive volcanic eruptions and devastating global warming. Only one in 10 species survived this cataclysmic end-Permian event.

Much was uncertain regarding the steps life took to piece itself back together after this disaster, or even how long it took. Now the clearest picture yet of this recovery has been discovered by a team of researchers, who excavated away half a mountain in Luoping in southwest China to unearth thousands of marine fossils, the first fully functional ecosystem seen after the end-Permian. [Gallery of the fossil organisms]

"The pattern and timing of recovery can tell us something about how life today might recover after human-induced crises," said researcher Michael Benton, a vertebrate paleontologist at the University of Bristol in England.

A trove of fossils

The 50-foot-thick (16 meters) layer of limestone that held these fossils dates back to when south China was a large island just north of the equator with a tropical climate. A smattering of fossil land plants suggest this marine community lived near a conifer forest.

The fossils are exceptionally well-preserved, with more than half of them completely intact, including soft tissues. Apparently they were protected across the ages by mats of microbes that rapidly sealed their bodies off from decay after death.

"Soft tissues can give us more profound information about larger patterns of evolution and relationships, such as the feathers on dinosaurs," Benton said. "Soft tissues in some of the marine creatures may help us understand diet and locomotion."

Ninety percent of the fossils are bug-like creatures, such as crustaceans, millipedes and horseshoe crabs. Fish make up 4 percent, including the "living fossil" known as the coelacanth, which is still alive today nearly 250 million years later. Snails, bivalves (creatures including clams and oysters), squid-like belemnoids, nautilus-like ammonoids and other mollusks make up about 2 percent of the fossils.

"Every time we find a new site like this, we get closer to what life in the past was really like," Benton told LiveScience.

A long time to heal

This extraordinarily detailed snapshot of a diverse bygone ecosystem reveals that life took a long time to heal from the massive damage it received — 10 million years, which is even more than it took life to recover after the K-T event that claimed the dinosaurs.

"Recovery after most mass extinctions, including the K-T, seems to have taken 1 million to 4 million years," Benton said. "The end-Permian event was so profound, killing perhaps 90 percent of species, that ecosystems had nothing left to hang their structure on."

"The importance of the discovery that ecosystems took 10 million years to recover completely reflects the unequalled severity of the event," Benton said.

Some marine animals such as the ammonoids did recover fast, within 1 million to 2 million years, but "physical environmental conditions continued to suffer setbacks for the 4 million to 5 million years of the Early Triassic, with four or five pulses of sudden heating and ocean stagnation," Benton said, referring to severe climate changes and reduced ocean water circulation. "The Luoping site and evidence from older locations in south China shows that ecosystems in total had not recovered until some 10 million years after the crisis."

The researchers now plan to explore the recovery over the ecosystem's entire life span to see which species recovered when and how the food web rebuilt itself. In addition, "we hope to now explore all the amazing fossil organisms from Luoping — this has only just begun and will take many years to document in detail," Benton said.

The scientists, led by Shixue Hu of the Chengdu Geological Center in western China, detailed their findings online Dec. 22 in the journal Proceedings of the Royal Society B.