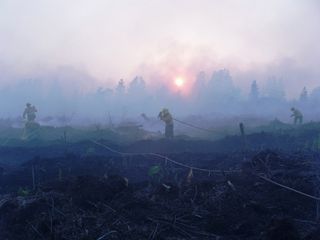 One of Earth's biggest stores of carbon dioxide sits locked within the decaying vegetation found in peatlands, which range from tropical peat swamps to Arctic permafrost. A fast-warming world could transform those peatlands into a "compost bomb" that would dump huge amounts of carbon into the atmosphere, British researchers have calculated.

A global warming rate of about 1.8 degrees Fahrenheit (1 degree Celsius) per decade will be enough to destabilize the compost if the peat is insulated from the atmosphere by dry moss or lichen, according to Sebastian Wieczorek, a mathematician at the University of Exeter in England.

Peat soils contain from 400 billion to a trillion metric tons of carbon, "which is about the same as the carbon content in the atmosphere," Wieczorek said. "A release of the soil carbon from peatlands into the atmosphere would therefore have an enormous impact on the climate system."

Peatlands cover just 3 percent of the world's land area, but they store almost 30 percent of all global soil carbon — about as much carbon as found in the atmosphere or in the total of terrestrial biomass (plants and animals).

The rapid rise in the temperature of peat that would follow the "compost bomb" scenario could even cause spontaneous combustion, Wieczorek said. He and his colleagues are currently investigating whether this might have helped trigger the fires that scorched Russia this past summer. [Earth in the Balance: 7 Crucial Tipping Points]

Even if spontaneous combustion did not occur, calculations showed that the peat might simply hover at a higher temperature and decompose more rapidly — a process that also would release more carbon quickly.

Rather than consider dangerous levels of global warming, Wieczorek and his colleagues created a mathematical model that focuses on the rate of the temperature changes. That's because certain systems, such as peatlands, can theoretically adjust to any temperature if given enough time.

If the temperature rises 1 degree C or more per decade, it could trigger the tipping point for the destabilization of the compost and the explosive release of carbon into the atmosphere. That rate represents the "dangerous rate of global warming" for the peatlands.

Wieczorek and his colleagues, reporting their findings in the Nov. 24 issue of the journal Proceedings of the Royal Society A, said their mathematical model captures the essence of the dangerous warming rate for the compost bomb scenario. But they noted that it does not include some factors, such as how soil microbes die or become dormant at high temperatures.

Next up, the researchers hope to use the more-realistic Joint UK Land Environment Simulator, which provides climate projections for the British Met Office, the United Kingdom's national weather service. The more-complex model would help verify their simpler model's rough estimates and also allow them to investigate a possible compost bomb link to the peatland fires in Russia, Wieczorek said.

Besides building on the compost-bomb instability concept that was detailed in the European Journal of Soil Science last month, Wieczorek and his colleagues hope that their model can help guide future goals and decisions regarding climate change.

"We do believe that it would be helpful for climate scientists and policymakers to think about dangerous rates of climate change, rather than just dangerous ultimate levels of global warming," Wieczorek said.