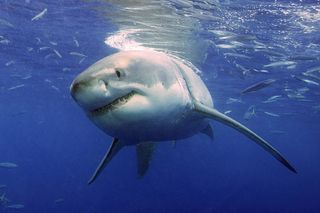 A population of great white sharks in the Mediterranean owes its existence to a few pregnant females that got lost hundreds of thousands of years ago, according to a new study.

An international team of scientists has performed the first genetic analysis of this shark community, revealing a close relationship to populations in the general region near Australia.

The researchers suspect a group of wayward females set up shop in the Mediterranean after extreme climate change some 450,000 years ago, in the middle or late Pleistocene epoch, produced strange currents that confused them during navigation or uprooted their prey, forcing them to follow their food to distant shores.

The pregnant sharks may have been swimming down the east coast of Africa when a strong current pushed them around the tip of the continent. They continued west along with the current and ended up in the Atlantic Ocean. The sharks tend to swim east to birthing grounds, the researchers said, and this time, instead of ending up back near Australia, they moved through the Strait of Gibraltar and into the Mediterranean.

Their trek was unusual because males are more likely to take long trips across ocean basins, while females tend to stay close to breeding areas, said evolutionary biologist Andrew Martin of the University of Colorado at Boulder, co-author of the paper published today (Nov. 16) in the journal Proceedings of the Royal Society B.

Because these sharks remain loyal to their breeding grounds, the females quickly settled into their new surroundings, the researchers concluded.

Martin and his colleagues collected tissue from four Mediterranean sharks and analyzed the mitochondrial DNA, which is passed on from mother to offspring. They compared the new sequences with previously published ones and found that Mediterranean sharks are more closely related to faraway populations in the Pacific and Indian oceans than to those in the nearby Atlantic. The results suggested the founding females arrived at their new home after an exceptionally long journey.

The researchers also discovered that the Mediterranean dwellers lack genetic variability. They probably suffered severe population bottlenecks because of a long history of intense fishing in the region, Martin told LiveScience. "All we're seeing today are the descendants of a few individuals that survived."

The lack of diversity puts this population at risk of succumbing to overfishing and local pollution in an environment that is relatively enclosed, like a lake. "A huge number of people draw on it for resources, and as a consequence, the top predators there compete with human beings," Martin said of the Mediterranean. "We can lose animals like the white sharks because we keep chipping away at the base of the food chain."

Apex predators shape the entire ecosystem, so a decline in the shark community could have devastating effects on all other species in the region.

"We are doing our best to make the world a much more unstable place, and the first things that register that are the top predators," Martin said. "We need to appreciate the lives of the organisms that we share the planet with."