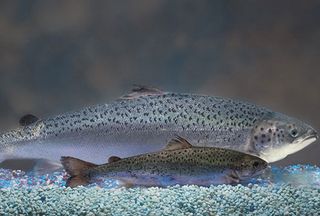 That juicy salmon steak on your plate may look the same as ever, but the fish has spent about half the growing time compared with its original farmed ancestor.

Today's Atlantic salmon reaches market size "about twice as fast as those the Norwegians farmed in 1970," according to Eric Hallerman, a fish geneticist at Virginia Tech. And now a new transgenic salmon may once again double growth speeds to four times the original rate.

The latest salmon, created by AquaBounty Technologies, could become the first genetically engineered animal to win approval from the U.S. Food and Drug Administration as food. Both genetically modified fish and farmed fish represent the future of food as long as they meet health and safety standards, experts now say. [See an image of the salmon.]

A series of recent FDA panel hearings brought geneticists and fishery managers to the table, along with consumer and environmental advocates in Rockville, Md. The public events aimed to air any concerns about the genetically modified salmon – preferably before they led to alarmed dinner-table discussions in U.S. homes. (Too late, the beast has already been dubbed "frankenfish" by critics.)

One expert suggested delaying any approval because of incomplete studies on how such rapid growth affects the health of the fish.

"The FDA said it would continue to monitor how well the fish perform over time," said Craig Altier, a molecular biologist at Cornell University. "I suggested the time to do it would be now, before approval."

The main concerns seem to involve animal welfare rather than direct risks to human health, according to Altier, who is also a member of the FDA's Veterinary Medicine Advisory Committee.

AquaBounty's Atlantic salmon has additional DNA from both Pacific Chinook salmon and an eel-like fish, which allows it to keep pumping out growth hormone year-round. So while the modified salmon doesn't grow bigger than normal salmon, its hyper-growth rate means that it can go to market sooner.

To ensure the genetic tinkering resulted in a fish safe to eat, the FDA ran (and reported on) "exhaustive" safety tests that turned up no increase in allergens (a possible human danger pointed out by critics), beyond the fact that fish already cause allergic reactions in some people. Growth hormone in the fish also exists in all meats consumed by humans.

"The FDA examined just about every component of the meat that they could think of," Altier told LiveScience.

Still, concerns remained about whether some of the studies had been large enough. Altier pointed out that AquaBounty's study on the health of the fish involved groups of just three to six fish, for a total of 120 in all – a puny sampling compared with the hundreds of thousands of salmon that could have been recruited.

In addition, AquaBounty thinned out its salmon population by removing the smallest, weakest or possibly abnormal, fish. Such practices are normal for fish farming, or aquaculture, because of the desire to maintain a healthy fish stock.

Even though routine, the weeding-out of abnormal fish could skew the study results, essentially leaving only positive results to report, albeit unintentionally, Altier said.

"They actually removed the ones that you might worry about," Altier explained. "The numbers that were removed were small, but it gave us great concern."

High pressure applied to the eggs renders the resulting offspring sterile with around a 99 percent effectiveness rate, according to Hallerman of Virginia Tech, who made a presentation at the FDA hearings.

The sterile, all-female offspring would grow up at a separate isolated facility in Panama. Their self-contained tanks would use re-circulated water, with redundant security measures to prevent accidental release.

Even if Atlantic salmon somehow escaped the Panama facility, they would not fare well in the warm water rivers, Hallerman explained. But a bigger risk could come from someone trying to break into the Prince Edward Island facility and stealing even one fertile fish.

"One area where I thought they could have had more detail is how they would secure the facility against human intrusion or theft," Hallerman said in a phone interview.

Still, he largely praised AquaBounty's "sensible approach" and cautionary measures. He added that both the company and FDA had taken unusual steps beyond what the law requires to hold public hearings, in the interest of transparency.

Fish on the farm

Fish farms and selective breeding alone have already sped up salmon growth to meet the demands of a hungry world, even without direct genetic tinkering.

For instance, the use of re-circulated water tanks represents a growing trend in aquaculture that has often produced better results than keeping the fish in ocean pens, Hallerman said.

For now, the FDA has told AquaBounty to keep collecting health data on its genetically modified fish for an indefinite period of time. A decision by the federal agency on whether the fish can go to market could come within the next several weeks or months.

Other examples of transgenic fish have already entered the development pipeline. But whether or not the fish themselves come from genetic tinkering, experts agree that the world has already come to rely upon artificial methods of raising fish through aquaculture – especially as wild fish populations plummet due to overfishing.

"The real challenge is doing aquaculture in a sustainable way," Altier said. "Could genetically engineered fish be a part of that? I think the answer is yes, but only with the highest level of security."

Aquaculture represented just 4 percent of the world's fishery products during the late 1970s, when Hallerman seriously began his professional career. Now the amount of farmed fish makes up 50 percent of fish consumed globally.

"I don't see any reason for that to slow down," Hallerman said.