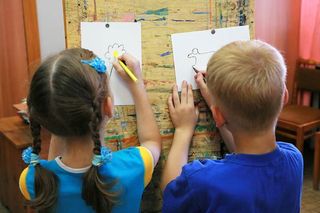 As schools start back into session around the country, some parents of young children face a difficult question: Send their little ones to kindergarten as soon as they become age-eligible, or hold them back in hopes that an additional year of maturity will give them an academic boost?

This voluntary kindergarten delay, dubbed "redshirting" after the practice of benching college athletes for a season to prolong their eligibility, is a source of much national and personal debate. As kindergarten programs have become more rigorous, redshirting proponents argue, kids need to be older to handle the curriculum. For children whose birthdays fall just before the kindergarten age cut-off date, redshirting bumps them from one of the youngest in the class to one of the oldest. It's a tempting prospect for parents who don't want their child to be the least mature in the room (or the smallest in gym class).

But research on redshirting suggests that the benefits are tempered by the costs, from an extra year of childcare for parents to a year less in the workforce for kids. Even the size of the benefits is up for debate. For that reason, many education experts and economists are wary of redshirting.

"The trend seems to be to have kids start later without much thought to the cost versus the benefits," said Darren Lubotsky, an economist at University of Illinois at Urbana-Champaign who has studied redshirting. "There might be some benefits, but there's a really big cost to kids starting later."

Benefits or not, kindergartners are an increasingly older bunch these days. According to a 2008 paper published in the Journal of Economic Perspectives, 96 percent of 6-year-olds were enrolled in first grade 40 years ago. Now, 84 percent of 6-year-olds are in first grade. The missing 12 percent haven't dropped out — they're enrolled in kindergarten instead. About a quarter of the shift is due to state and school district policies that push age cut-off dates earlier in the year, the researchers reported. The rest is due to voluntary redshirting.

According to the National Center for Education Statistics (NCES), about 9 percent of kindergartners were redshirted between 1993 and 1995. Data is currently being collected on this year's batch of kids, but won't be available for several more years. Based on a 2007 report, an NCES representative estimated that 14 percent of kids ages 5 to 6 were redshirted or had parents planning to delay their kindergarten entry.

Boys are more likely to be delayed than girls, as are white children and children in high-income families. Although studies show that minority parents are more concerned than white parents about their child's readiness, a lack of income often prevents minority parents from delaying their kids; Childcare is simply too expensive.

What redshirting means for individual kids is tough to determine. Some studies find that redshirted kids are academically on par with their classmates. Others detect a slight academic boost. A 2005 study by the RAND Corporation, for example, found that kids who delayed entry by a year scored 6 points higher than their classmates on standardized math tests and 5 points higher on reading tests, an effect that persisted to first grade.

"That's not surprising, because you would do better at age 6 than age 5," said Ashlesha Datar, the RAND economist who led the study. It's not that the 6-year-olds are smarter; they just have an extra year of life experience to draw on.

"Over time, I think the effect of being in school becomes more dominant than your age effect," Datar told LiveScience. "So one might expect that these [redshirting] effects might fade off."

Indeed, many studies have found that redshirted kids lose their head start over time, some as early as third grade. The University of Illinois' Lubotsky looked at kids in kindergarten through eighth grade and found that older kids maintained a slight academic gain throughout elementary and middle school.

Over the course of the study, the gap between older and younger kids began to close, the researchers found.

"Kids who are older do a lot better at the beginning, but that doesn't mean they're going to do better throughout their educational career," Lubotsky said.

As with research on the early benefits of redshirting, research on long-term benefits is mixed. One 2006 study published in the Quarterly Journal of Economics looked at age at kindergarten entrance in an international sample of children and found the youngest kids in each grade lagged behind in test scores through eighth grade, though the gap shrank over time. The researchers also found that the oldest kids in each grade were about 10 percent more likely to go to a four-year college than younger peers.

Another study, this one published in 2010 in the journal Economics of Education Review, found very different results. In this study of American students, age at kindergarten entry had no effect on wages, employment, homeownership, household income, or marital status as an adult. The researchers also found no evidence for an effect of age on college enrollment.

In fact, kids who entered kindergarten younger were about 1 percent more likely to graduate high school than older kids. That could be because older kindergartners reach the age at which they can legally drop out of school earlier in their educational career than younger kindergartners.

For many parents, studies on thousands of kids mean little when they're contemplating sending their own child, with all of his or her individual strengths and weaknesses, to kindergarten. That's a reasonable response, according to Lubotsky.

"I wouldn't want parents to make a decision based on a single research study, because parents know more about their own kid," he said.

The important thing is that parents consider the costs of their choice as well as the potential benefits, he said. Delaying kindergarten means an extra year of childcare. And in a dozen years or so, that child's same-age peers will be going to college and entering the workforce while he or she is still in high school.

"If you hold your child back for a year, your child might do better in his or her grade," Lubotsky said. "But he's still going to be very behind all the kids who are the same age."

If questions arise about a child's social or academic readiness, parents should turn to a professional for advice, said Donald Easton-Brooks, a professor of education at the University of North Texas. In the absence of a diagnosable problem, most kids will do fine in school, he said, especially if they've gone to preschool or had lots of opportunities to develop their social skills during play-dates.

"Teachers will tell you, 'I would much prefer children come into a classroom with good social skills and know nothing, because if they know how to behave in a classroom, I can teach them anything,'" Easton-Brooks said.