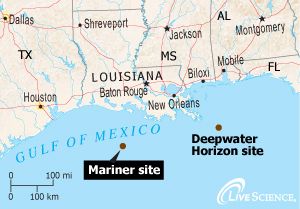 Location of the Mariner Energy oil platform in the Gulf of Mexico, 90 miles (145 kilometers) south of Vermillion Bay, La.

An explosion on the Mariner Energy oil platform in the Gulf of Mexico is the latest in a series of drilling-related disasters in the Gulf.

Why exactly are all these companies drilling in the Gulf, and where did all that oil come from anyway?

Oil, the lifeblood of U.S. transportation today, is thought to start with the remnants of tiny organisms that lived millions of years ago, but the exact chemical transformation is somewhat mysterious.

Geologists do know, however, that the Gulf of Mexico's ancient past has created a present-day oil driller's dream.

"It's a place where the conditions were right to create the kind of proteo-materials for oil and gas," said marine geologist Harry Roberts of Louisiana State University in Baton Rouge. "Plus the geology was right to transform them and then to trap them."

The main reason the Gulf of Mexico is such a hotbed for oil and gas exploration today is because it is stuffed full of so-called source rocks. These rocks were formed millions of years ago during the Cretaceous, pre-Cretaceous and Upper Jurassic eras, "when dinosaurs were out running around," Roberts said. These rocks, however, were created by something much smaller than dinosaurs — layers of algae on the bottom of the Gulf.

Most geologists think the petroleum we pump from the ground (and later refine into gasoline and other fuels) comes predominantly from the fossils of marine life, such as algae and plankton. Back when the Gulf of Mexico was just starting to form, it began breaking apart like the Red Sea is today, creating tidal flats, which are coastal wetlands that crop up when tides and rivers dump mud in an area. These swampy wetlands became home to algal mats, which are lipid-rich organic materials.

Algal mats grew all around the perimeter of the early Gulf, but over time, massive sediment flow — ultimately the result of the Rocky Mountain rising out of the ground — eventually buried the remains of these algal mats — turning them into source rocks — deep within the Earth. The scorching temperatures within the Earth then cooked the source rocks, turning them from lipid-rich to oil-and-gas-rich.

Brett Israel is a staff writer OurAmazingPlanet a sister site for LiveScience.