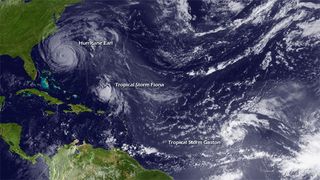 Three swirling storms are roaring across the Atlantic with nervous East Coast residents keeping a close eye on the conveyor belt of tropical activity as hurricane season enters its busiest time.

Hurricane Earl is bearing down on the Carolinas and has strengthened into a Category 4 storm, with maximum winds of 145 mph (235 kph), according to the latest update from the National Hurricane Center (NHC). Category 3 storms or higher on the Saffir-Simpson scale of hurricane strength are classified as major hurricanes. [In Images: Hurricane Hunters Flying into Earl.]

Tropical Storms Fiona and Gaston are following in Earl's wake, with winds about one-third as strong.

Late August through September is the busiest time of the Atlantic storm season, which explains why three tropical storms in a row are spinning north over the Atlantic Ocean. All the necessary ingredients to cook up a storm are present. The triple threat was created by a swath of the Atlantic Ocean's warmest water, stretching along the equator and well north of it, from Africa all the way to the Caribbean and into the Gulf of Mexico. Scientists refer to this as hurricane alley.

Most hurricanes that hit the United States begin either in the Caribbean or the Atlantic. Many of the worst storms start as seedlings coming off the coast of Africa, as all three of the current storms did.

Low-pressure systems move westward off the west coast of Africa, where they encounter the warm waters of the tropical Atlantic, which serve to drive the convective engines that power these forces of nature. Storms that form in this way are called Cape Verde-type storms, as they form near the Cape Verde Islands. The warm waters of hurricane alley can sustain a storm all the way from its seedling stage in Africa to monster hurricane slamming into the U.S. coast.

Ocean waters must be at least 80 degrees Fahrenheit (26.5 Celsius) down to a depth of at least 150 feet (50 meters) to properly spawn a storm, scientists estimate. Ocean waters are typically at their warmest at the tail end of the Northern Hemisphere summer, when the sun's rays have been beating down on them for months. (This time lag is similar to the one that makes mid-afternoon the warmest time of the day instead of noon, when the sun's rays are most direct on the ground.)

When a hurricane moves over a swath of water, however, it cools the ocean, so another hurricane on the same path may find less favorable conditions because its supply of fuel — the warm waters — have been used up. Likewise, as a storm races toward the Northeastern United States, as Earl is expected to do, it moves over cooler water and tends to weaken rapidly.

Yet storms also tend to pick up speed as they head north, and can, in rare cases, reach forward speeds of 55 mph (90 kph) by the time they near Long Island, N.Y. This forward speed is added to the internal wind speed on the right side of a storm, and it can take a Category 1 storm and effectively make it a Category 4 in a narrow region of the storm.

Such powerful and deadly storms have, on rare occasion, slammed into the New York region and the Northeast.

Upon landfall, the top sustained winds, those that last a minute or longer, can drop rapidly due to a dampening effect caused by rough terrain — bushes, trees and houses. But a corresponding increase in brief gusts sort of makes up for this, danger-wise. The gusts are enhanced by turbulence caused by the rough terrain, bringing faster winds to the surface in bursts that last a few seconds.