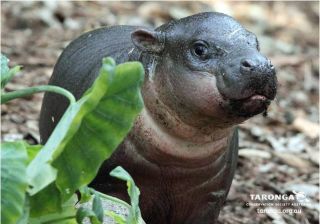 The female infant named Kambiri, a pygmy hippo, was born at the Taronga Zoo in Australia on June 26.
(Image: © Rick Stevens.)

A cute-as-a-button pygmy hippo is in the spotlight, a month after the tot was born at Australia's Taronga Zoo.

The pygmy hippo is just one of several dwarf-size creatures in the animal kingdom; these petite creatures range in size from the pygmy marmoset and pygmy possum that could both fit in the palm of your hand to the pygmy horse and pygmy hog, which are smaller than their normal-size counterparts, but definitely wouldn't fit in your fist.

The animals are not just scaled-down versions of their hefty counterparts, either. For instance, the pygmy hippo is not as adapted to life in the water as the hippo and so its feet are not as webbed and it bears its calves on land not water.

Zookeepers say breeding programs, like the one that produced Kambiri, are important for the pygmy hippo, which  was listed as endangered by the International Union for Conservation of Nature (IUCN) in 2006, with 1990s estimates putting the population at fewer than 3,000 individuals. That number could be too high, and a 20-percent decline over the following 20 years would be a reasonable assumptoin, according to the IUCN.

The baby pygmy hippopotamus is the second female calf born to Petre and Timmy, following Monifa, which was born in 2008. Despite Petre initially showing strong nurturing behavior toward Monifa, the calf had to be hand-reared by zookeepers.

"We are delighted that Petre is suckling this calf [Kambiri] and appears to be doing everything right to raise the infant without our help," said Renae Moss, the zoo's hippo manager, in a statement.

For now, Kambiri will only spend short stints in her exhibit, as the little one needs time to perfect her swimming. And like all infants, the baby pygmy hippo gets tuckered out quickly, zoo keepers say.

Here are some other animals with tiny statures:

*Pygmy tarsier (Tarsius pumilus): Weighing just 2 ounces (57 grams), they resemble mini gremlin creatures, as they have big eyes and are covered in dense coats of fur to keep warm in the damp, chilly habitat of cloud forests in Indonesia.

*Pygmy marmosets (Callithrix pygmaea): the smallest living monkeys on Earth, weighing an average of 4.4 ounces (125 grams) with 5-inch- (12.7-cm)-long bodies and an 8-inch (20-cm) tail. These pipsqueaks can reportedly leap more than 16 feet (4.9 meters) skillfully navigating through forest canopies. Though not currently endangered, the pygmy marmoset is listed as a species of special concern or somewhat threatened, with the exotic pet trade being one threat, according to the Smithsonian Zoological Park. Due to their size, mobility and cryptic coloration, head counts are tricky.

*Pygmy seahorse (Hippocampus bargibanti): Growing to just 0.8 inches (2 cm) in length, this seahorse has a short snout, knob-like crown on its head and a spine above each eye and on each cheek, according to the Australian Museum.

*African pygmy hedgehog (Atelerix albiventris): The roly-poly animal weighs just 21 ounces (600 g). This hedgehog shows various unique behaviors, including a process called self-annointing – when the animal discovers a new taste or scent it spreads frothy saliva across its body in a series of contortions, according to the University of Michigan Museum of Zoology. Scientists don't know the reason behind the odd behavior.

*Mountain pygmy possum (Burramys parvusI): Australia's only hibernating marsupial lives in the Australian Alps. There are fewer than 2,000 individuals in the wild, due to construction of roads, dams and ski resorts in its habitat, according to the San Diego Zoo.