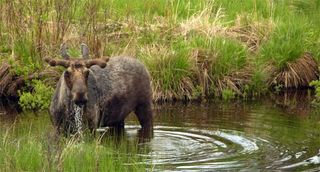 Arthritis is generally thought to be caused by wear and tear on the joints with age, but malnutrition early in life might also contribute to the condition, a new study on animals suggests.

The work did not involve the usual lab rats or mice, but rather much larger creatures: wild moose.

The 50-year study reveals how moose suffer from a nearly identical form of human osteoarthritis — the breakdown of cartilage in joints, which can lead to bone rubbing on bone, causing pain.

The results have also lead scientists to reexamine the causes of arthritis in the human population over the course of history. Malnutrition might have played a role in the increased prevalence of the disease in Native Americans about 1,000 years ago, the researchers say.

The study, which began in 1958, was carried out on Isle Royale, a wilderness island national park  in Lake Superior and part of Michigan. The island inhabitants include one large predator, the wolf and one large prey species, the moose. The research has involved three generations of scientists who have studied the skeletal remains of over 4,000 moose, mostly killed by wolves or harsh winters.

"As the study entered its second decade there was increasing evidence of osteoarthritis in the moose population," said study researcher Rolf Peterson of Michigan Technological University.

Osteoarthritis is especially deadly for moose in this population as it prevents them from being able to kick or avoid a lunging wolf.

Over the course of the study the team discovered a rise in osteoarthritis as the moose population increased, and a decrease when the population fell, leading to the idea that the condition is linked to moose malnutrition when food is scarcer.

Examination of the size of moose foot bones revealed moose that were malnourished when young were more likely to develop osteoarthritis in older age and die with the disease.

Also, for moose, small stature in general is associated with poor nutrition in developing years. The researchers found the smallest moose in the population had 32 percent greater odds of dying with arthritis.

The findings might explain why historical human populations saw a rise in osteoarthritis when they switched over from hunting and gathering to agriculture.

Such changes were documented in a mid-continental population of Native Americans. In this group arthritis increased by 65 percent as the society turned from foraging plants and animals to farming, after which their diet relied heavily on maize.

"Initially the increase in osteoarthritis was put down to increased joint stress due to the labor of agriculture. However research now shows that, like the moose in Isle Royale, nutritional deficiencies early in life may have been the main cause," said study researcher Clark Spencer Larsen, an anthropologist from Ohio University in Athens.

"Early malnutrition was certainly a part of existence for many pre-historic human societies, and remains a fact of life for millions of people across the world, so this study is also relevant for modern human society," he said.

The connection between early nutrition and arthritis in both people and moose indicate that the disease might be more complex than commonly assumed, the researchers conclude.

The findings were published online July 7 in the journal Ecology Letters.