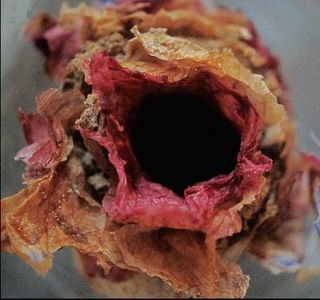 Not all bees toil in wax beehives — some live in the lap of luxury, building nests lined with colorful flower petals, a new study finds.

The Middle Eastern bee in question, Osmia avoseta, is a solitary species, as nearly 75 percent of the some 20,000 bee species are, meaning that each individual bee lives by itself.

In nests that are 0.5 to 2 inches (1.5 to 5 centimeters) beneath the ground, the females of this species line the one or two chambers of each nest with overlapping pink, yellow, blue and purple petals, starting from the bottom.

The female then plasters a layer of claylike mud onto the petals just a half-millimeter wide — less than half the thickness of a dime — and finishes the lining with another layer of petals, essentially creating a petal sandwich.

The bees then deposit a sticky, nutritious mix of nectar and pollen on the chamber floor, lay an egg, and seal the chamber up by carefully folding the petals at the top and plugging it with mud. This nursery then hardens, like the shell of a nut, to protect the insides against predators. As such, the offspring remain safe after they hatch, devour their rations, spin cocoons and fall into a 10-month sleep within their plush digs until they emerge mature in the spring.

"Unfortunately, her larvae never enjoy the brilliant colors of the nest's walls because they have no eyes," said researcher Jerome Rozen, curator in the division of invertebrate zoology at the American Museum of Natural History in New York. "And, anyhow, they would need a flashlight."

These petal sandwiches likely help keep water both in and out of the nests. By keeping humid air in, the food the mother leaves behind remains moist and soft enough to eat. By shutting water out, the nests don't get flooded during storms and could even float like bubbles if they got washed out from the ground.

"The architecture of the way these whole things are constructed is quite remarkable," Rozen told LiveScience.

In a rare coincidence, as Rozen and colleagues made their discovery while working near Turkey's Antalya province, another group of researchers made the same find the same day in a field in Iran's Fars province.

"It was absolute synchronicity that we all discovered this uncommon behavior on the same day," Rozen said.

The scientists detailed their findings in February in the journal American Museum Novitates.