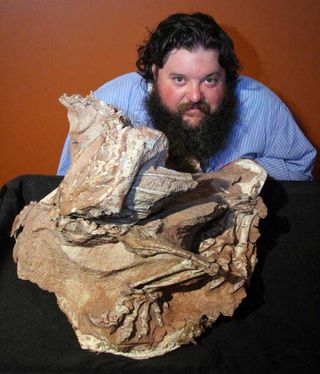 Paleontologist Mark Loewen displays the newly discovered dinosaur species, Seitaad ruessi, which is derived from the Navajo word, Seit'aad, a sand-desert monster from the Navajo creation legend that swallowed its victims in sand dunes.
(Image: © Utah Museum of Natural History, University of Utah.)

A plant-eating dinosaur might have been swallowed up by a collapsing sand dune some 185 million years ago in what are now Utah's red rocks. The desert disaster likely plopped the dinosaur onto its head, where it remained until being discovered by a local historian and artist in 2004.

The study results were announced today.

Joe Pachak was hiking in the Comb Ridge area near Bluff, Utah, when he spotted the bony fossil protruding from the multicolored cliffs of the Navajo Sandstone, which represents the remains of a huge sand dune desert as large as the modern-day Sahara Desert. As such, the dinosaur has been named Seitaad ruessi, derived from the Navajo word "Seit'aad," a sand-desert monster from the Navajo creation legend.

In 2005, museum paleontologists and crews excavated and collected the specimen, which included most bones of the skeleton, except for the head, and parts of the neck and tail. The missing parts were lost to erosion over the past thousand years, but were almost certainly visible when Native Americans lived on the cliff just above the skeleton, the researchers say.

Only recently has the skeleton been examined. It is described in the March 24 edition of the journal PLoS ONE. The discovery helps to fill a gap in knowledge about the animal's family of dinosaurs, whose North American fossils are sparse.

Analyses confirm Seitaad belonged to a group of plant-eating dinosaurs called sauropodomorphs. Like other members of the group, Seitaad had a long tail and neck topped with a small head and was equipped with leaf-shaped teeth likely specialized for an herbivorous diet. A large curved claw on its "thumb" is a bit of a mystery, as paleontologists aren't sure what function it would have for an herbivorous beast that's not snagging meaty prey.

Sauropodomorphs roamed much of the globe during the Early Jurassic (from about 176 million to 200 million years ago), when the continents were still connected in the supercontinent Pangaea. Millions of years later, sauropodomorphs evolved into the largest animals to ever plod the Earth – sauropods. For instance, the sauropod Brachiosaurus stretched more than 65 feet (20 meters) and weighed nearly 20 tons.

"Although Seitaad was preserved in a sand dune, this ancient desert must have included wetter areas with enough plants to support these smaller dinosaurs and other animals," said Sertich. "Just like in deserts today, life would have been difficult in Utah's ancient 'sand sea.'"

The scientists say seasonal rainstorms akin to today's summer monsoons could have done the trick, filling ponds and other low spots between the sand dunes.