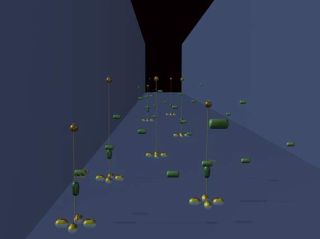 A micro-channel with DNA strands anchored in it with the metal beads pulling them straight and the motors fixed at various points on the DNA.
(Image: © University of Portsmouth)

Just about any machine depends on switches to turn this on or that off. And fully functioning nano-machines will need switches that are just as small as they are. Molecular switches, or "mol-switches," also could control larger devices and they could send information about the nano-world to remote, conventionally sized, sensors.

These little switches, say scientists at the at the University of Portsmouth, in England, also could someday form the foundation of radically smaller electronic circuits and may be useful for faster and more accurate DNA sequencing.

This new molecular switch works by yanking on single strand of DNA to wiggle a tiny metal bead [illustration].

One end of this double-helix strand is attached to a minuscule channel in a microchip. The DNA's other end has the metal bead attached to it. The metal bead is just a micrometer wide; that's one millionth of a meter, or about one-fiftieth the width of a human hair.

The bead is paramagnetic, which means that it acts as though it is a magnet when it is in a magnetic field. As a result, the little bead is pulled toward the field, causing the strand to stand up.

Next an engine that reels in the DNA is added to the strand itself. The motor is a naturally occurring protein—called a restriction-modification enzyme—and the fuel is adenosine triphosphate, or ATP, a molecule of sugar, phosphate, and adenine that provides energy to muscles and other biological components. The protein binds only to specific spots on a strand of DNA.

Some background: All DNA is composed of four types of nucleotide bases, A (adenine), G (guanine), C (cytosine), and T (thymine). The order, or "sequence," of these bases determines genetic characteristics.

The engine's protein will attach itself only to certain sequences of the DNA bases, says Keith Firman, a molecular biotechnologist at the University of Portsmouth, allowing scientists to control the its location on the DNA precisely.

When ATP fuel is added to the area surrounding the switch, the motor pulls the DNA, looping the leftovers below it, until it reaches the metal bead, which rams into the motor like a knotted rope jamming into a pulley.

When the motor runs out of fuel, it releases the DNA and the magnetic field pulls the DNA taut again.

Like any magnetic material, the paramagnetic bead will generate an electrical signal when it moves through a magnetic field. To detect this miniscule signal, the scientists scattered "Hall Effect sensors" in the base of the channel in which the DNA is tethered.

"You have a sensor below where the DNA is," Firman explained, "and that sensor electrically senses a moving magnet."

The result is a microscopic device that can send a switching control signal when fuel is added to it.

"It's a switch because it is activated by the fuel for the motor, which is ATP," Firman said. "When it is active it will switch on an electronic device and when not active it will allow it to switch off again."