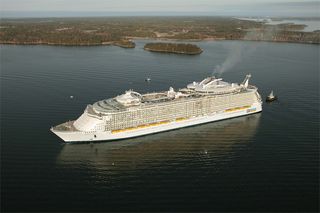 The world's largest cruise ship departed from Turku, Finland, on Oct. 30 en route to Fort Lauderdale, Fla., where it will make its U.S. debut.
(Image: © Oasis of the Seas.)

The world's largest cruise ship is making its first transatlantic crossing from Finland to Fort Lauderdale, Fla., where it will make its U.S. debut. Though colossal, the ship relies on the same physical principles as its smaller brethren to stay afloat.

The massive ship, called the Oasis of the Seas and built by STX Finland for Royal Caribbean International, stands 20 stories high, is as long as four football fields, and can accommodate 5,400 guests at double occupancy.

The two typical measures of size are length and weight, which is measured as displacement, or the weight of water the ship must displace to stay afloat. "She is 1,180 feet long and displaces 100,000 tons," said Paul Miller of the Department of Naval Architecture & Ocean Engineering at the U.S. Naval Academy in Maryland, referring to the Oasis of the Seas.

In terms of space available, the Oasis is nearly five times larger than the Titanic. Specifically, the Oasis can hold 225,282 gross registered tons, while the Titanic could hold 46,329 grt.

This measurement was derived long ago to describe a ship's space for a common cargo — wine. Since wine was shipped in "tuns" that each held 8 barrels or about 242 gallons, a ship that could carry 8,000 wine barrels was considered a 1,000-tun ship. "Tun" evolved into "ton" and then into "gross registered ton."

The Oasis is 50 percent larger than the runner-up, which is a group of Freedom-class ships (such as Freedom of the Seas), according to Royal Caribbean International.

How does such a huge ship float?

"It's just like any other ship. It has to displace an equal amount of water to how much it weighs," said Matthew Collette, assistant professor of Naval Architecture and Marine Engineering at the University of Michigan. If it didn't, the ship would sink.

To displace this amount of water, and keep the ship stable without having a massive draft beneath the water, the designers created a wide hull.

About 30 feet (9 meters) of the ship sits beneath the water, which is a small percentage of the ship's overall height.

Dealing with the elements

The idea of a cruise generally means sunny skies, and such ships will change their ports of call to avoid large storms or hurricanes, Collette said. That's not to say rough seas are out of the question.

"It's hard to know for sure how this ship would ride without knowing the details of its design, but wide, shallow ships such as this tend to be 'snappy' in that they have so much stability they tend to snap back upright after a wave has passed, which can be uncomfortable to be on," Collette said. "The sheer size of this ship will also help it, as larger ships tend to be better rides in rough weather."

Another issue is the superstructure, or the part of the ship that extends above the main deck.

"We have learned how to design and build large ships successfully," said Miller, the engineer with the U.S. Naval Academy. "What is a bit challenging about this ship is the amount of superstructure. That can cause windage problems in hurricanes, but the basic idea of cruise ships is to run away from them."

While this ship will likely stay in warm tropical waters, what if it did stray and come upon a titanic iceberg? "The ship is bigger and generally able to take more damage than a smaller ship," Collette said. "However, as the ship is bigger, it has more kinetic energy to dissipate if it was involved in a collision, which may mean it would also suffer more damage."

And no matter the size of a water craft, rogue waves are always a concern. Rogue waves are rare but towering problems that can soar 100 feet and are known to sink large cargo ships. Scientists have only recently begun to figure out what's behind the once-mythical waves. A study in 2008 suggested that in rare circumstances, waves that would normally cancel each other out can combine to form tall monsters in quick fashion.

The Oasis is no low-riding cargo ship, however.

"If it was struck by one I would expect there to be some local damage at the point of impact — maybe some broken portholes or bent railings, but little else," Collette said. "All ships are designed to make the chance of large-scale structural collapse very remote."

And while the ship's behemoth size is garnering plenty of attention, the goal of such a cruise ship is to make it feel small. To do this, the Oasis is divided up into various themed neighborhoods, including parks, such as one themed after Central Park, boardwalks and a sports zone.

"It's an attempt to try to make it feel smaller, because you don't want the passengers to feel like they're just a commodity," Collette told LiveScience.

When you look under the hood, however, the giant cruise ship is pretty basic. "Most of the innovation of the ship is the size and the passenger amenities," Collette said. "In terms of the propelling machinery, the design of the ship, it's all very similar to the cruise ships that have come before. There's not a lot of new ground here."

Such a leviathan presents other issues, including figuring out an evacuation plan for so many passengers and being able to fit into ports.

Should we expect an even larger ship any time soon?

"Whether this ship is the limit I don't know," Collette said. "Because the economy has kind of turned south since they signed the contract for this ship, I don't think anyone is going to challenge it for the record in the next three to four years."