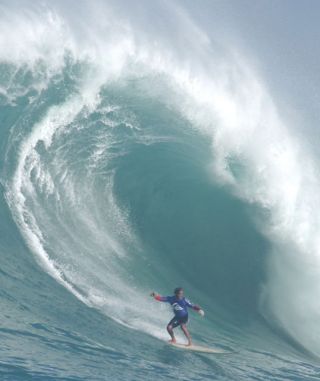 Deadly rogue waves 100 feet tall or higher could suddenly rise seemingly out of nowhere from the ocean, research now reveals.

Understanding how such monstrous waves form could lead to ways to predict when they might emerge or, potentially, even drive them at enemy vessels, scientists added.

For centuries these killer waves had been dismissed as myths — towering walls of water blamed for mysterious disappearances of ships. But on New Year's Day on 1995, a wave that reached more than 80 feet high was detected with scientific instruments at an oil platform in the North Sea, confirming the existence of these legends.

Since then, the European Union initiated Project MaxWave, which relied on imagery from European Space Agency radar satellites to spot what appeared to be rogue waves around the world. Now scientists are trying to uncover what causes these monsters.

Previous work had suggested that it requires hundreds of miles of open sea for the waves to appear and disappear. Now scientists find that such waves could rapidly form without such buildup.

To investigate these waves, the researchers experimented with liquid helium in a cavity just an inch wide, whose fluid properties they could readily tinker with, far more so than attempting to do the same at sea. "The basic principles remain the same with both," said researcher Peter McClintock, a physicist at the University of Lancaster in England.

Normally a large wave breaks up into smaller and smaller waves over time, until the viscosity of a fluid damps out these small waves. Now the scientists demonstrate the opposite can happen in fluids — tiny waves can concentrate together to become abnormally large waves "that emerge surprisingly quickly," McClintock told LiveScience. "I'm pretty sure this is how rogue waves come about."

Research should now focus on what combination of forces can trigger such waves out in the sea — for instance, wind or lunar pull. While artificially creating a rogue wave out of nothing would likely require impractically large amounts of energy, it might be feasible to control such waves to save vessels, attack ships, or perhaps even channel them to drive turbines and generate power, "although that's a fairly far-fetched idea," McClintock said.

McClintock and his colleagues will detail their findings in a forthcoming issue of the journal Physical Review Letters.