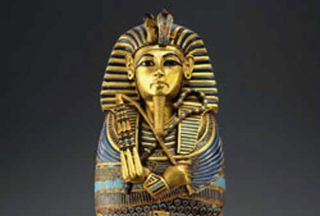 Two mummified fetuses found in Tutankhamen's tomb back in 1922 are probably twins, despite the fact that one is much larger than the other, a team of scientists recently announced.

King Tut has always held a fascination for the public, and the idea that the young pharaoh and his presumably beautiful wife, Ankhesenamen, the daughter of Nefertiti, had twins adds even more drama to the story.

The possibility of twins for Tut also underscores the fact that conceiving twins is a common human story. It's also one that begs for an explanation.

Humans are primates, which means that unlike mice, we don't have litters. Instead, we primates, that is lemurs, lorises, monkeys, apes and humans, typically give birth to offspring one at a time and then invest heavily in each baby .

This strategy of fewer but finer seems to work pretty well. Primates may not survive in great numbers, but we are a tenacious group that inhabits all sorts of environments and just keeps on going.

Clearly, the "all your eggs in one basket" is a reasonable way to pass on genes.

Of course, the path of evolution is never perfect, and there are some species of primates that have more than one offspring at a time. Tamarins, small monkeys in South America, usually have twins; mothers rely on fathers to help out.

Rarely, monkeys and apes give birth to twins, and when they do it's cause for amazement. One morning years ago, while watching a group of Barbary macaque monkeys, I was stunned to discover that the highest ranking female had given birth to twins, a boy and a girl, the night before. I was also charmed to discover that the whole monkey troop was as fascinated as I was by this blessed and unusual event.

But we are much less surprised when people have twins because the twinning rate is relatively high in our species compared with most of our primate relatives.

But oddly enough, humans surpass both monkeys and apes in number of multiple births. The human twining rate is estimate at 1.1 percent worldwide, and the current rate in the United States is 3 percent, presumably because more women are having babies later in life and there is an increase in twinning with maternal age.

More interesting, scientists suspect that twins are conceived much more often, but sometimes one dies out and is reabsorbed by the mother's body, or the larger fetus takes over and crowds the other out, making the pregnancy risky for both, as in the case of Tut's twins.

If twinning is such a set-up for failure, why do humans keep making them?

One possibility is that humans have taken a page out of the mouse reproduction book and are on a slippery slope toward putting our eggs in many baskets rather than one.

Or maybe twinning is a back-up strategy pulled out under certain circumstances. Support for this idea comes from the fact that twinning varies across cultures and among environments.

As such, humans might have the more flexible reproductive strategy, one that works well in an unpredictable world, and one that has been with us for a very long time.