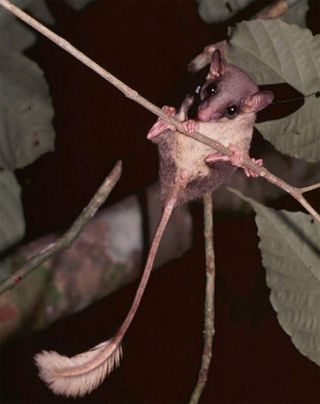 The Malaysian pen-tailed tree shrew could drink the most annoying drunken fratboys under the table. A new study found that the tiny animal subsists on a diet roughly equivalent to 100 percent beer, drinking up the fermented nectar of the flower buds of the bertam palm plant.

The nectar can reach up to 3.8 percent alcohol content, one of the highest alcohol concentrations ever recorded in a natural food. Though some animals, such as bats and birds and of course, humans, are known to imbibe on occasion, the tree shrews could be nature's biggest lushes.

"There are other animals that do drink alcohol but not on a continuous basis," said researcher Marc-André Lachance, a microbiologist at the University of Western Ontario. "For bats and birds it would be just at the time that the plants are producing fruit. These animals are doing that around the clock and all year round. That's pretty unique."

Amazingly, though the tree shrews drink like fish, they don't seem to get drunk. The researchers, led by Frank Wiens of Germany's University of Bayreuth, videotaped regular nocturnal feeding sessions and followed the movements of radio-tagged tree shrews. Though they measured blood-alcohol concentrations in the animals higher than those in humans with similarly high alcohol intake, the tree shrews showed no signs of intoxication.

"They seem to have developed some type of mechanism to deal with that high level of alcohol and not get drunk," Lachance told LiveScience. "The amount of alcohol we're talking about is huge — it's several times the legal limit in most countries. So if we can figure out why these animals are able to cope with it perhaps it could be used to develop medicines to help people deal with alcohol poisoning."

The discovery is particularly intriguing because the tree shrew is believed to be very similar to the last common ancestor of all living primates. The researchers hypothesize that this ancestor may have consumed alcohol at moderate or high levels, which could explain why humans have some tolerance for alcohol.

In the case of the tree shrews, the animals could have developed the ability to handle high volumes of alcohol because the bertam palm was the best source of food available in their habitat.

"This plant in that part of Malaysia is quite widespread," Lachance said. "It's a very spiny, very uninviting plant. The lower buds from which the alcohol comes out are very sharp. You can easily hurt yourself on them. I speak from experience."

As nectar accumulates in the bertam palm's flower buds, a complex yeast community there ferments the nectar. This process happens continually year-round, so the plant offers a continuous source of food, since alcohol is energy-rich.

The findings are detailed in the July 28 issue of the journal Proceedings of the National Academy of Sciences.