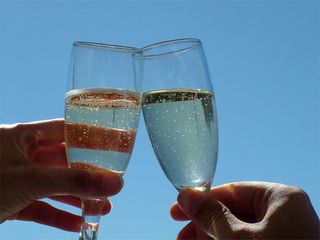 If ringing in the New Year feels like a gong banging in your head, chances are you drank too much alcohol celebrating New Year's Eve, and you're not alone.

Scientists have studied few of the common treatments for hangovers found at your local drugstore. However, you can avoid headaches this holiday by learning the facts about alcohol: a cup of coffee won't sober you up, popping Tylenol can be bad for your liver, and the hair of the dog will only prolong your pain.

"The severity of a hangover is related to the blood alcohol level you reach, how rapidly you drink, and the amount you drink," said Dennis Twombly, program director of the Division of Neuroscience and Behavior at the National Institute on Alcohol Abuse and Alcoholism (NIAAA). "After the alcohol has been cleared from the system, a hangover can last for 8 to 24 hours, depending on how much you've consumed."

Hangovers cost the United States more than $148 billion annually in worker absenteeism and poor job performance, according to a study by researchers at the Veterans Affairs Medical Center in San Francisco Calif. But sleeping off a hangover is the best way for your body to cope during those painful hours.

Having stayed awake past your bedtime to see the clock turn midnight will make you sleepy. Adding alcohol to the mix will lower your blood sugar, disrupt the quality of your sleep, and really tire you out.

Many people assume that drinking caffeinated beverages or taking a cold shower will help them sober up and snap out of a hangover. It will help you feel more awake, but it can't help your body remove the alcohol from your system or speed up your recovery.

As well as sleepiness, alcohol and hangovers can impair judgment, leading to a surge of alcohol-related traffic crashes on New Year's Eve, according to the National Institute on Alcohol Abuse and Alcoholism.

"If your tired, alcohol will magnify that, and you're more likely to fall asleep at the wheel," Twombly said. "Drowsy driving is a big factor in traffic fatalities."

Hair of the dog that bit you

Don't believe the folklore remedy that drinking more alcohol will cure your hangover.

More alcoholic drinks will only boost the existing toxicity of the alcohol already in one's body, and may lead to further drinking, according to previous research.

With a hangover, you're most likely suffering from dehydration and a deficiency of important minerals like magnesium and potassium. Symptoms of dehydration include headache, cottonmouth, lightheadedness, and thirst. Drinking water and sports drinks will help you replenish your fluids, according to the NIAAA.

You may also feel queasy. Alcohol is also an irritant and can cause inflammation of the stomach lining and gastrointestinal discomfort.

"These symptoms become worse if someone has consumed beverages with more alcohol content like shots of whiskey, as opposed to more dilute drinks such as beer," Twombly told LiveScience.

You can find some relief for your hangover at the drugstore. But know what to look for and read labels carefully.

Do not take acetaminophen, a common alternative to aspirin found in Tylenol and other painkillers , Twombly warned. The drug is toxic to the liver when it interacts with alcohol.

Steer clear of a hangover this New Year's Eve by following suggestions from the NIAAA: