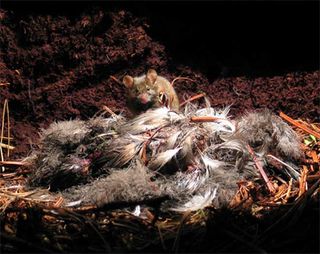 A band of mice didn't look so cute and furry when they were caught on tape killing albatross chicks. This kind of widespread onslaught has lowered the birdÃ¢â‚¬â„¢s breeding success rate significantly. Prior to the graphic evidence, conservationists blamed rats for the decimation of seabird populations.

Gangs of house mice have been caught attacking and killing seabirds 300 times their weight on an island in the South Atlantic Ocean.

House mice (Mus musculus) were thought to pose little risk to island birds, until now. Now, video footage exposes tiny house mice as they invade the nests of young chicks and proceed to gnaw through chicks' feathers and skin before gorging on their entrails.

The result is more than a tale of mighty mouse gone bad; with so many chicks dying and not making it to adulthood (an age when they can breed), the island’s bird populations can take a nosedive.

While islands represent a small fraction of Earth’s land area, they are home to a relatively large percentage of bird species. Since 1600, more than 90 percent of avian extinctions have occurred among island species, say the authors of the new study.

Many of the extinctions have been blamed on invasive mammals, particularly rats. Conservation efforts, therefore, have focused on eradicating the non-native rats from such islands. Mice, on the other hand, had been deemed to pose no threat to seabirds and left to populate islands sometimes without competition from their rat relatives.

That’s the case on Gough Island in the South Atlantic, where mice are the sole introduced mammals. Turns out, that’s a morbid recipe for the local birds.

Between January and September 2004, Ross Wanless of the University of Cape Town in South Africa and his colleagues monitored 300 Tristan albatross (Diomedea dabbenena) nests. They examined chicks for wounds about three times a month and filmed chicks using an infrared video recorder.

Mice were caught on video gnawing on and often killing live chicks of all three bird species. One video showed up to 10 mice mauling an albatross chick and eating from three open wounds on its body.

The scientists describe a brutal attack to illustrate the finding that chicks didn’t seem to fight against the attackers. “No chicks displayed appropriate behavioral responses to attacks, even though mice had eaten through the body wall of one filmed albatross chick and were consuming the contents of the chick’s abdominal cavity,” they write in a report of the research published in the journal Biology Letters.

By late September 2004, 100 of the 256 monitored albatross chicks had died. Before the mouse attacks, all the chicks were apparently healthy, suggesting the rodent thugs didn’t target weak or sick individuals.

At the end of the study, the researchers calculated a breeding success of just 27 percent for the albatross, which is “unprecedented” for this species. Typically, about 60 percent to 70 percent of the chicks survive.

Mice also wreaked havoc on the Atlantic petrel chicks as soon as the babies hatched in July 2004, and by September 2004, just 20 of the 60 monitored chicks were still alive.

The scientists speculate that on islands where house mice are just one part of a network of invasive species, including rats, they pose less of a threat to seabirds compared to larger predators. But on six islands where house mice are the sole invasive mammals, Wanless said, scientists should study the effects of mice on seabird breeding successes.