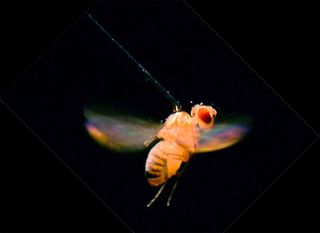 Uncork a bottle of your favorite Cabernet outside in the summer and odds are good a pesky fruit fly will find your glass by the time the glass finds your lips. Turns out, the teensy party crasher navigates using mathematical rules that maximize the chances it will locate your full-bodied drink.

“Wine is extraordinarily attractive to them,” said the new study’s co-author Mark Frye of UCLA. “I wouldn’t be surprised if the animal came from half a kilometer away.”

Scientists have known that fruit flies (Drosophila melanogaster) use visual cues to make quick turns and prevent nasty collisions with nearby objects.

“So we knew what was causing a fly to steer when it got close to things,” Frye said. The new study, published in the April issue of the journal PLoS ONE, reveals what they didn’t know: why the flies make swift twists and turns when out in the middle of nowhere, far away from obstacles.

Frye and his colleague, Andy Reynolds of Rothamsted Research in England, used two video cameras to track fruit flies in dome-like enclosures, at the bottom of which they hid an odor source. Inside the enclosure, each fly made a bunch of 90-degree turns followed by a longer straight path.

An analysis of the paths showed the flies followed a tried-and-true method for sniffing out the odor.

“Their strategy is trying to optimize two things,” Frye said. "They want to detect something that’s very faint, and they want to move around enough that they don’t get stuck in one place where there aren’t any good smells.”

The fly’s seemingly erratic flight paths match up with a mathematical algorithm called Lévy’s distribution, which optimizes the chances of finding a tasty snack.

Humans do the same thing without realizing it, while, for example, standing in the kitchen and trying to pinpoint the source of a noxious odor. “You stand still and sniff around and realize it’s not here, so you move down to the refrigerator and you sniff again—am I getting warmer or colder?” Frye explained.