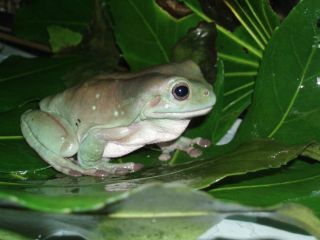 The ability to stick to smooth objects and detach when needed is a perpetual game of geometry for tree frogs, which repeatedly adjust the angle of their toes with respect to the surface.

White’s tree frogs—originating in Australia and Indonesia and capable of growing to almost 5 inches—maintain their grip on surfaces by keeping the angles of their toe pads below 90 degrees, according to a new study presented earlier this month at the annual meeting of the Society for Experimental Biology in Glasgow, Scotland.

“The toe pads of tree frogs are coated with thin mucus which adheres to surfaces by wet adhesion, like wet tissue paper sticking to glass,” said study leader Jon Barnes of the University of Glasgow. Rather than a mechanical force, such as air suction, adhesion relies on the attraction between molecules of its toe pads and those along the walking surface.

The tree frogs, which range in color from light blue to emerald green and gray, can stick to leaves and trees even when they are tilted downward, which would typically make more of a slide than a steady platform. The frogs can also detach their toe pads in a snap to jump elsewhere when needed.

”The process by which they detach their toe pads is called peeling and is akin to us removing a sticking plaster from ourselves,” Barnes said, referring to adhesive bandages.

To investigate how these gravity-defying amphibians can both stick and peel, Barnes and his team measured the adhesive and frictional forces created by the frogs' toe pads when placed at different angles.

Adhesive forces weakened at steep angles above 90 degrees. So when the frogs needed to stay stuck to a surface, they kept the angle of their toes with respect to the surface at low values, and when the time came to detach they increased these angles.