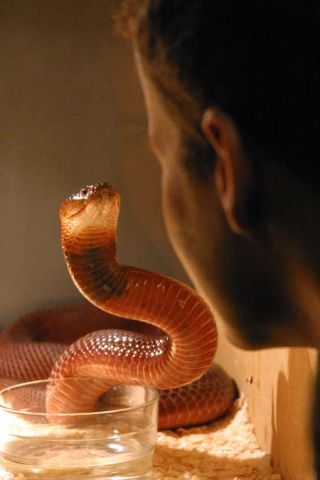 A newly identified deadly snake in India is one of several now challenging the long-held concept that there are only four dangerous snakes in the country, sometimes known as the land of snakes.

The hump-nosed pit viper is one among at least 13 snakes now counted as having medical significance in India in a recent report released by members of the World Health Organization's Snakebite Task Force.

Twelve hours after being bitten by the hump-nosed pit viper, a patient's blood becomes incapable of coagulating. The patient bleeds and develops renal failure. There is no antivenom for the viper.

The hump-nosed pit viper is often mistaken for a saw-scaled viper, one of many new details in the March issue of the journal Wilderness and Environmental Medicine.

There are more than 250 snake species in India and more than 50 of those are venomous. Estimates for the number of venomous snake species in the United States range from 20 to 29, with all falling into four groups—rattlesnakes, copperheads, cottonmouths and coral snakes. (Technically, snakes are venomous, not poisonous, as they inject their toxin. Poison must be inhaled or injected.)

Snakebites cause an estimated 50,000 fatalities annually in India, said Ian Simpson, a member of the WHO Snakebite Treatment Group, but just a dozen or fewer per year in the United States.

The hump-nosed pit viper isn't one of the "Big Four," a list of the region's most deadly snakes that consists of the Indian cobra, common krait, Russell's viper and saw-scaled viper, which now is known to closely resemble the hump-nosed pit viper. The difficulty in distinguishing the two snakes has likely led to many deaths due to confusion over how to treat the bites.

"In the last century the 'Big Four' provided an easy means to alerting people to some of the most significant snakes," said Simpson, also with the Tamil Nadu Government Snakebite Task Force in India. "Now it is outdated and proving confusing to doctors."

"It also curtails research into how many medically significant species there are," he said. "Some people just refuse to accept that there are more than four and cling to outdated ideas that are decades out of date."

By constantly referring to the Big Four, Simpson said, doctors are misled about what antivenom treatment is best for their patients. Meanwhile, antivenom manufacturers have yet to produce new concoctions to protect against snakebites other than the Big Four.

Much of Indian medical education is taught with Western textbooks that have snakebite chapters only relevant to American species. This leads to unnecessary antivenom use and much confusion.

In addition, doctors in rural clinics uneducated in treating snakebites refer patients to better-equipped hospitals that often require the patients to travel for hours, often in a state of agony and/or shock, without antivenom.

"We have developed protocols and support material to enable primary care doctors to treat snakebite with confidence," Simpson told LiveScience. "These are being implemented in a number of states in India."