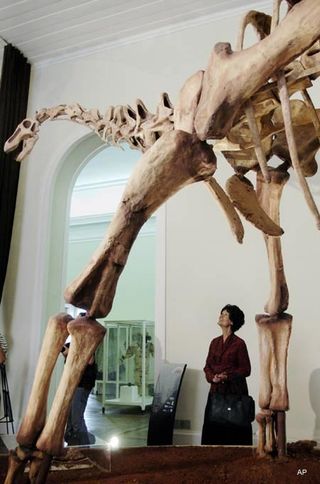 A woman looks at a replica of the Maxakalisaurus topai-- a mid-sized herbovre from the late Cretaceous period and the largest dinosaur species yet discovered in Brazil.
(Image: © Renzo Gostoli/AP)

RIO DE JANEIRO, Brazil (AP) -- Scientists on Monday unveiled a replica of a skeleton scientists said was from the largest dinosaur species yet discovered in Brazil -- a mid-sized herbivore that roamed central Brazil some 80 million years ago during the late Cretaceous period.

A scientific description of the dinosaur, which represents a previously unknown species and measured some 13 yards from head to tail, was published on Aug. 11 in Brazilian National Museum's bulletin.

Scientists named the dinosaur species Maxakalisaurus topai in homage to the Maxakali Indian tribe, which inhabits the region of Minas Gerais state where the bones were found.

Kellner said the bones were excavated near the Serra da Boa Vista, a mountain near the city of Prata, some 440 miles northwest of Rio de Janeiro, over the course of four field seasons between 1998 and 2002.

The dinosaur, which weighed an estimated nine tons, belongs to the Titanosaur group, which means Titanic lizard. Kellner said four species in that group have been discovered so far in Brazil.

Dr. Kristina Curry Rogers, curator of paleontology of Science Museum of Minnesota and who was not involved with the discovery, reviewed Kellner's paper and confirmed Maxakalisaurus represented an important new species.

"It's pretty cool really. It's a pretty complete Titanosaur. They've even got a little of a skull which is incredible for a Titanosaur because we've found maybe less than 10 skulls for that group,'' Rogers said by telephone from Minnesota.

Rogers said the find was also interesting because the Brazilian scientists found osteoderms, or bony plates that some dinosaurs develop within their skin. Because the skin rarely survives along with the fossil, however, scientist are unsure where the osteoderms were placed on the living dinosaur.

"It tells us a little bit more about the family, because only some have these specialized bones,'' Rogers said. "It gives us a little more information.''

Kellner said out of the 1,000 known dinosaur species in the world, only 15 have so far been described in Brazil -- a country larger than the continental United States. By comparison, some 50 dinosaur species have been discovered in neighboring Argentina, including the Argentinasaurus, also a Titanosaur, which is probably the largest dinosaur yet discovered, weighing around 100 tons and measuring around 100 feet (30 meters).

"If dinosaur species were soccer goals, Brazil would be getting pounded,'' Kellner said.

He said it was especially hard to find dinosaur remains in Brazil, because so much of the country is jungle, whereas dinosaur fossils are most likely to be found in deserts and semiarid regions.