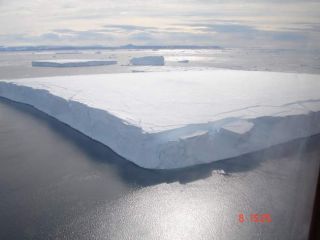 Joining the growing list of places on this planet that are melting, Antarctica is losing some 36 cubic miles of ice every year, scientists said today.

The south polar region holds 90 percent of Earth’s ice and 70 percent of the total fresh water on the planet, so any significant pace of melting there is important and could contribute to an already rising sea.

"This is the first study to indicate the total mass balance of the Antarctic ice sheet is in significant decline," said Isabella Velicogna of the University of Colorado at Boulder.

The study is detailed today in the online version of the journal Science.

Other studies have documented rapid melting, unprecedented in modern times, in Greenland and around the North Pole. And rapid melting of individual glaciers has been noted in Antarctica.

For now, the newly measured melting might seem like a small quantity. The loss of ice in Antarctica amounts to about 0.4 millimeters of global sea rise annually, with a margin of error of 0.2 millimeters, the study concludes. There are about 25 millimeters in an inch.

However, computer models run in 2001 predicted Antarctica would gain ice during the 21st century due to increased precipitation in a warming climate. But the new study, based on satellite measurements between 2002 and 2005, shows the opposite.

Antarctica is twice as large as Australia. The ice sheet, which covers about 98 percent of the continent, has an average thickness of about 6,500 feet—more than a mile.