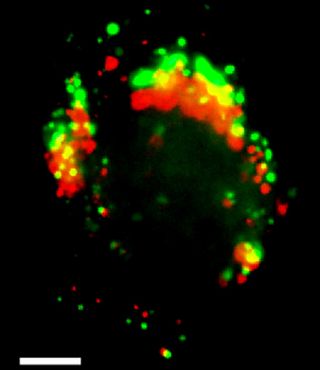 A false-color overlay of fluorescence from a cell taken at four minute intervals reveals the dots moving from the green to the red positions.
(Image: © Chen and Gerion)

The newest generation of nano-sized probes should give scientists a look into the secret lives of nuclei within your body, researchers say.

The tiny probes, called quantum dots, are a melding of biology and technology. The crystalline semiconductors with a biological protein coating are no larger than a few hundred atoms. Importantly, they shine brilliantly when hit with a laser.

"The advantage is that they don't photo-bleach like conventional fluorescent dyes," Chen told LiveScience. The dots can stay in cells for weeks, Chen said, adding that "it looks like the protective coating we put on there is quite good."

The tricky part was to get the dots through a nuclear membrane. Part of the solution is just a matter of making them tiny. But nuclear membranes have gate-keeping mechanisms to keep foreign objects out.

To get past this barrier, Chen borrowed a page from a virus' playbook. The virus SV40 coats itself with a special protein that allows it to sneak into the nucleus. By attaching this protein to the quantum dot, the part biological, part nano-sized semiconductor slips through the membrane.

Scientists attach probes to cellular molecules, such as DNA and proteins, to monitor their travels through a cell. Similarly, the probes could be attached to disease-fighting drugs and scientists could track how they go to work, Chen said. This type of information could help doctors in prescribing medications.

The work was announced last month and detailed earlier in the journal Nanoletters.