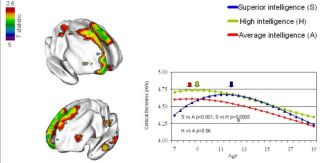 The developmental trajectory of cortex thickness differs as the brain matures in different IQ groups. Thickness of the area at the top/front/center, highlighted in MRI brain maps at left, peaks relatively late, at age 12 (blue arrow), in youth with superior intelligence.
(Image: © NIMH Child Psychiatry Branch)

Smart kids don't necessarily have bigger brains than their peers, but the parts of their brains involved in thinking change more during adolescence.

As children grow up, the outer mantle, or cortex, of their brains thicken and thin as new neural connections are being made and then pruned to become more efficient. Using brain scans, researchers have found that the cortices of kids with high IQ scores thickened faster and for a longer period of time than children of average intelligence.

The findings are detailed in the March 30 issue of the journal Nature.

Researchers used magnetic resonance imaging (MRI) to scan the brains of 307 children at several points during development from the ages of about 6 to 20. Most of the children were scanned at least two times, at two-year intervals.

The children's intelligence was measured using the Wechsler IQ test, which tests verbal and non-verbal knowledge and reasoning. Based on the scores, the subjects were placed in one of three groups: superior (121-145), high (109-120) and average (83-108).

The scans showed that the cortices of all the children's brains thickened during childhood before thinning again.

The cortices of the smartest 7-year-olds in the group, as an example, started out thinner than average but thickened until age 11 or 12 before thinning. Cortex thickening in children with average IQ, in contrast, peaked at about age 8, and displayed only gradual thinning afterwards.

This could reflect a longer developmental window for high-level brain circuits, the researchers said.

The cortices of the smart kids also thinned faster during their late teens, likely due to more efficient pruning of unnecessary neural connections, said study leader Philip Shaw from the National Institute of Mental Health (NIMH).

"People with agile minds tend to have a very agile cortex," Shaw said.

Most of the changes were seen in the prefrontal cortex, an area known to be involved in thinking and other higher-level cognitive functions. This makes sense, Shaw said.

"The parts of the brain where the [changes] are most different are also those that are the seat of complex thought."