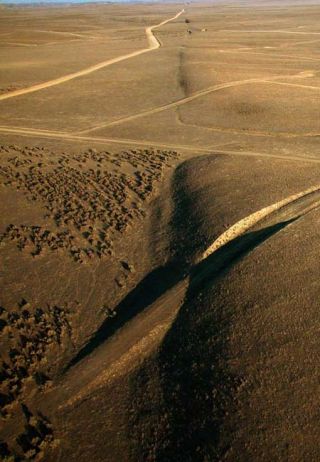 California's San Andreas Fault is associated with some of the most destructive earthquakes in U.S. history, but some parts of the fault system are much quieter than others, rubbing smoothly against each other rather than sticking and then jerking loose in a huge rupture.

A new study of samples from these more leisurely fault sections has revealed that tiny particles of clay keep these sections lubricated and less likely to violently shake.

The relatively smooth movement that occurs in some sections of faults is called creep. The question of why some fault zones creep slowly and steadily while others lock for a time and then shift suddenly and violently, spawning earthquakes, has long puzzled scientists.

Some have speculated that fluids facilitate slippage, while others have focused on serpentine — a greenish material that can chemically react to form talc (the mineral that in loose form is commonly known as talcum powder).

But geologist Ben van der Pluijm and colleagues at the University of Michigan and Germany's Ernst-Moritz-Arndt Universität Institut für Geographie und Geologie found that neither of these was the explanation.

Instead, they found that fractured rock surfaces were coated with a thin layer of smectitic clay, less than 100 nanometers thick (about the size of the particles in wood smoke), that acts something like grease on ball bearings.

The nanocoatings of this clay occur on the interfaces of broken-up bits of rock in exactly the places where they affect the fault's "weakness," or how easily it moves.

"For a long time, people thought you needed a lot of lubricant for creep to occur," van der Pluijm said. "What we can show is that you don't really need a lot; it just needs to be in the right place. It's a bit like real estate: location, location, location."

By dating the materials, the researchers found that the clays, hidden only in fault rock, formed relatively recently.

"The clays are growing in the fault zone, and the fault is coating its own pieces of fragmented rock," van der Pluijm said. "At some point there's enough coating that it begins to drive the behavior of the fault, and creeping kicks in."

But not all areas of the fault are greasing themselves at all times, which means earthquakes can still happen.

"The problem is that the fault doesn't always move at strands where the coating sits," van der Pluijm said. The San Andreas Fault is actually a network of faults, with new strands being added all the time. Because it takes some time for the slick nanocoatings to develop in a new strand, the unlubricated, new strand "gets stuck" for a time and then shifts in a violent spasm.

Van der Pluijm and colleagues think the clay nanocoatings also are likely forming and driving fault behavior at greater depths beyond where the samples were taken. What's more, analyses of older, inactive strands suggest the coatings have been facilitating creep for the millions of years of fault activity.