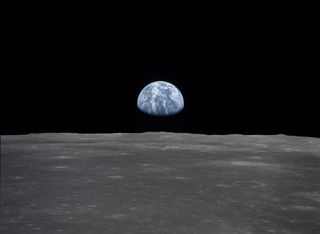 The moon may be 150 million years older than many scientists thought, a new study of rare radioactive elements reveals.
(Image: © NASA)

The moon is old — this much is certain.

In a new study published July 29 in the journal Nature Geoscience, scientists describe fresh evidence that our moon is apparently on the older side. By analyzing the ratios of rare radioactive elements in a sampling of moon rocks collected during the Apollo missions, scientists from Germany narrowed the date of the moon's formation down to about 50 million years after the birth of our solar system — 150 million years earlier than many studies estimate. [5 Strange, Cool Things We Recently Learned About the Moon]

This is helpful information if, say, you want to buy the moon a cake with the appropriate number of birthday candles — or, as the study authors wrote, if you want to better constrain the dates for when the Earth was born.

"As the moon's formation was the final major planetary event after Earth's formation, the age of the moon provides a minimum age for Earth as well," geologist and lead study author Maxwell Thiemens, former University of Cologne researcher, said in a statement.

That's because the moon likely formed after a rogue, Mars-sized planet collided with the young Earth in the early days of the solar system. The debris from this giant impact (mostly bits of Earth’s pulverized mantle) sprayed into the atmosphere, eventually coalescing into the round, rocky satellite we know and love.

This theory explains why the Earth and the moon have a nearly identical chemical composition. It's possible, for example, that when that rogue impactor smashed into our young planet, it picked up some rare elements from Earth that are unlikely to have come from elsewhere in the solar system. By studying the decay of some of the radioactive elements in modern moon rocks, the German researchers attempted to constrain the dates of the big impact and the formation of the moon.

The team was curious about two rare isotopes (different versions of elements) in particular — hafnium-182 and the isotope it eventually turns into after eons of radioactive decay, tungsten-182.

The relative abundance of these elements can serve as a kind of cosmic clock, the researchers wrote, as halfnium-182 has a half-life of about 9 million years (meaning that half of a given quantity of the element would have decayed into something else after that time).

"By the time we've reached eight half-lives (about 64 million years), the element is functionally extinct" from the solar system, Thiemens told Live Science in an email. That puts a hard limit on the possible dates that the proto-moon could have picked up the isotope during its collision with Earth; If hafnium-182 ever existed on the moon, the collision must have occurred within the first 60 million years or so after the solar system’s formation, before those rare isotopes vanished completely.

As the researchers expected, the Apollo moon-rock samples proved more abundant in tungsten-182 than they did in similar rocks from Earth — suggesting that the moon had indeed once been rich in hafnium-182.

So, how can the scientists be certain that the moon’s glut of tungsten-182 actually came from decayed hafnium-182, and wasn’t just scooped up from Earth after the decay process had finished? According to Thiemens, it has to do with the way elements were distributed during Earth’s formation.

"When a planet is forming, it is entirely molten," Thiemens said. As Earth’s core formed (about 30 million years after the solar system did), heavy elements like iron sank into the core, taking siderophile (or "iron-loving") elements along with them. Meanwhile, lithophile ("rock-loving") elements mainly remained near the surface to become part of the planet’s mantle. Because tungsten is a siderophile, any tungsten-182 that was around during the huge impact probably would have already sunk into Earth’s core, Thiemens said. Hafnium, meanwhile, as a lithophile, would have probably been abundant in Earth’s mantle, right at the site of the impact. It’s safe to hypothesize, then, that the abundance of tungsten-182 in moon samples today came from decayed hafnium-182 picked up from the Earth in the first 50 million or 60 million years of the solar system’s life.

So, the moon is old — probably even older than most of us thought. And, if you ask us, it doesn't look a day over 4.3 billion.