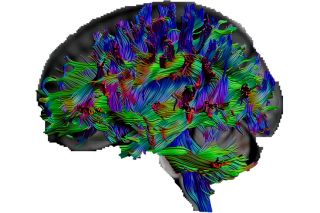 With a special kind of MRI called "diffusion tensor imaging," the researchers were able to visualize pathways in the brain.
(Image: © © RUB, Erhan Genç)

We all have that friend who "knows everything," wins at trivia and can have a conversation on just about any topic and seem knowledgeable. Turns out, these smarty-pants have very efficiently paved brains, a new study suggests.

A group of neuroscientists at the Ruhr-University Bochum and Humboldt University of Berlin, both in Germany, analyzed the brains of 324 people with varying degrees of general knowledge (like the kind of information that would come up in a game of trivia). Researchers gave these participants over 300 questions touching on various fields, such as art, architecture and science, to gauge the individuals' level of general knowledge, also known as semantic memory.

Investigators used a kind of magnetic resonance imaging known as diffusion tensor imaging to track the water that flows around the brain — which typically follows along the paths paved between brain cells. So, by tracking the water during brain scans, the researchers were able to "see" the connections. [Inside the Brain: A Photo Journey Through Time]

It makes sense that people who have more general knowledge have more-efficient brain connections, said study lead author Erhan Genc, a researcher in the Department of Biopsychology at the Ruhr-University Bochum.

Different bits of general knowledge get stored in various spots across the brain, he said. Imagine a simple question: What year did the moon landing happen? We might have "moon" stored in one area, "moon landing" in another and even the year the event happened in another. So, in order to answer the question, the brain has to connect "moon" to "moon landing" to "year," and it does so through these connections. It stands to reason that if the connections are more efficient, that information can travel quickly and easily, he said. [What If Humans Were Twice As Intelligent?]

"With our study, we cannot solve this issue," Genc told Live Science. In order to do that, the researchers would need to track individual people across time to see how their brains change — something the scientists hope to look at in the future.

The findings were published July 28 in the European Journal of Personality.