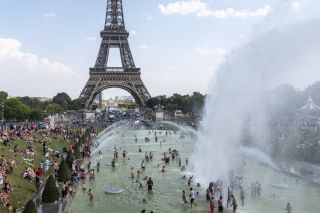 Water jets spray Parisians trying to cool off in the Fontaine du Trocadero at the foot of the Eiffel Tower on July 25, as France was racked by some of the highest temperatures ever recorded.
(Image: © Samuel Boivin/NurPhoto via Getty Images)

July 2019 may have been the single hottest month in recorded history, preliminary data from the World Meteorological Organization shows.

Global average temperatures from July 1 to July 29, 2019, met and possibly even surpassed the previous record for the hottest month ever, which was set in July 2016, U.N. Secretary-General António Guterres said in a news conference yesterday (Aug. 1).

"This is even more significant because the previous hottest month, July 2016, occurred during one of the strongest El Niños ever," Guterres said, referring to the semiannual climate cycle that shifts the Pacific Ocean's warmest water toward South America, affecting weather patterns around the world. July 2019, meanwhile, did not coincide with a strong El Niño — temperatures were just really, really hot, due to climate change, he added.

The month was characterized by relentless heat waves around the world. On July 25, numerous European countries — including Belgium, Germany and the Netherlands — experienced new national heat records with temperatures in excess of 104 degrees Fahrenheit (40 degrees Celsius). The city of Paris also recorded its hottest day ever at 108.6 F (42.6 C), while widespread droughts in India left millions of people without water.

The scorching July follows the hottest June ever recorded and puts 2019 on track to be among the top five hottest years in history, Guterres said.

"We are on track for the period from 2015 to 2019 to be the five hottest years on record," he said. "If we do not take action on climate change now, these extreme weather events are just the tip of the iceberg."

That iceberg, Guterres added, is rapidly melting. The ice sheets of Greenland alone lost a staggering 217 billion tons (197 billion metric tons) of ice last month — enough to raise global average sea levels by 0.02 inches (0.5 millimeters), according to The Washington Post. Meanwhile, unprecedented wildfires scorched so much of the Arctic that the smoke was visible from space, releasing about 100 megatons of carbon dioxide into the atmosphere from June 1 to July 21 — roughly the amount of CO2 that Belgium releases in a year, CNN reported.

The frequency and intensity of severe weather, natural disasters and record-smashing heat waves are all likely to increase year after year until the world's most developed nations take significant measures to reduce their greenhouse gas emissions, a group of scientists reported last month in the journal Nature Climate Change.

In a 2018 report, the U.N.'s Intergovernmental Panel on Climate Change (IPCC) wrote that reducing global temperature rise to 2.7 F (1.5 C) above preindustrial levels instead of 3.6 F (2 C) could result in hundreds of millions of people being spared from the deadliest dangers of climate change, including famine, drought and lethal heat waves. Humans have already warmed the planet by about 1.8 F (1 C) above pre-industrial levels and are poised to hit the 2.7-degree threshold as soon as 2030.