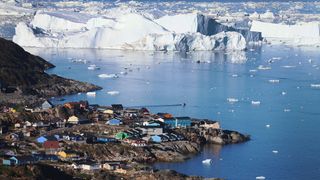 Ice floats past the village of Ilulissat in Greenland.
(Image: © Joe Raedle/Getty)

This massive thaw represents some of the worst melting since 2012, according to The Washington Post. That year, 97% of the Greenland ice sheet experienced melting. This year, so far, 56% of the ice sheet has melted, but temperatures — 15 to 20 degrees Fahrenheit above average — have been higher than during the 2012 heat wave. All told, this July's melt alone was enough to raise global average sea levels by 0.02 inches (0.5 millimeters), according to the Post.

"This might seem inconsequential, but every increment of sea-level rise provides a higher launchpad for storms to more easily flood coastal infrastructure, such as New York's subway system, parts of which flooded during Hurricane Sandy in 2012," Andrew Freedman and Jason Samenow reported in the Post. "Think of a basketball game being played on a court whose floor is gradually rising, making it easier for even shorter players to dunk the ball." [8 Ways Global Warming Is Already Changing the World]

That melting occurred after a heat wave that had swept across Europe in July, setting temperature records in France, settled over Greenland. And June was the hottest June ever recorded the world over. This massive global warming coincides with a drastic increase in atmospheric carbon dioxide levels, to amounts not seen in the last 800,000 years. At the same time, part of Greenland is on fire.

In the long term, climate change is expected to cause even more-rapid melting — melting that is even more extreme than predicted by even the worst-case models just a few years ago. That will mean worsening storms, swamped coastlines and millions of climate refugees. At the same time, the heat that's melting all that ice is expected to make vast regions of the world uninhabitable for parts of the year, as temperatures climb beyond what the human body can handle.

Meanwhile, in Greenland, the heat wave is still going on.