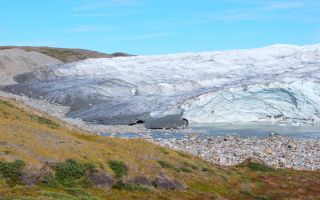 Things are about to heat up in Greenland, which is already experiencing higher-than-average ice melt.
(Image: © Shutterstock)

A heat wave that shattered records in Europe this week is on the move, and it could melt billions of tons of ice in Greenland.

Hot air that originated over Northern Africa recently brought blistering heat to Europe; yesterday (July 25), Paris sizzled at a staggering 108.7 degrees Fahrenheit (42.6 degrees Celsius), and temperature records were broken across the continent by up to 6 degrees F (3 degrees C), according to Accuweather.com.

When this warm air arrives in Greenland, it will likely cause "another major peak in melt area," said Twila Moon, a research scientist with the National Snow and Ice Data Center (NSIDC) in Boulder, Colorado.

Intense melt during the summer months has been the norm rather than the exception in Greenland since 2006, NSIDC reported in 2013. More ice is lost every year, with the rate of melt accelerating rapidly, Moon told Live Science in an email. This could have serious implications worldwide by contributing to rising sea levels and further disrupting global climate, Joyce Msuya, the U.N. Environment's acting executive director, said in a statement in March.

"What happens in the Arctic does not stay in the Arctic," Msuya said. "More urgent climate action is needed to steer away from tipping points that could be even worse for our planet than we first thought."

"2012 was a year of particularly large ice loss. Unfortunately, an early melt event in Greenland in June may have primed some of the ice sheet surface for more melt," Moon said. The ice sheet is losing its surface snow; warming is also creating lakes and ice crystals on the sheet's surface, increasing the likelihood of further melting.

The good news is that even substantial ice loss from just one year probably won't create a tipping point for Greenland's ice sheet. The bad news is that significant ice loss over many years — with no years of ice gain — means that Greenland's accumulated ice is draining away at an unprecedented rate, Moon said.

However, it's not too late for people to mitigate the worst-case scenario for Greenland's ice by dialing back the greenhouse gas emissions that are fueling human-caused climate change, Moon said.

"Our collective actions will play a major role in determining how much and how quickly ice is lost from Greenland, and how severe the associated impacts will be," she said.