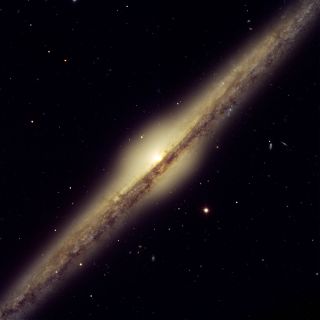 The spiral galaxy NGC 4565, about 38.8 million light-years away, has a radio halo that has been clearly detected for the first time.
(Image: © ESO)

Angels aren't the only celestial beings wearing halos — galaxies have them, too.

A galaxy gains such a heavenly ring when massive supernovas, or exploding stars, inside the galaxy send high-energy particles hurtling outward to the galaxy's fringes at the speed of light. As these particles fly, they send out radio waves that form rings around many galaxies in the universe. But until recently, scientists had an incomplete picture of this phenomena.

The discovery of one of these halos, around a galaxy 38.8 million light-years away from Earth, could change that. [Interstellar Space Travel: 7 Futuristic Spacecraft to Explore the Cosmos]

With an average radio telescope, galaxy NGC 4565 appears unremarkable, its halo thin and very faint, Judith Irwin, an astrophysicist at Queen's University in Ontario who was not involved in the study, told Live Science. But when scientists looked at the galaxy using the Low-Frequency Array (LOFAR), a radio telescope network in the Netherlands, they saw the halo clear as day. (Radio waves are a form of electromagnetic radiation that has lower energy and frequency and longer wavelengths than visible light.)

They could see the feature more clearly because galactic halos are made up of radio waves at a wide range of energies, but most radio telescopes can detect only the highest-energy radio waves, which are emitted by the higher-energy particles. Observing low-energy halos like this one has long been a pie in the sky for astronomers, George Privon, an astronomer at the University of Florida who was not involved in the study, told Live Science. It was an idea " that people first probed several decades ago" but making those low energy measurements has been nearly impossible "until LOFAR."

LOFAR is the first observatory that can detect frequencies below 250 megahertz.

That's important because without LOFAR, scientists had a huge blind spot in ancient galactic history. Those easier-to-measure radio waves on the higher end of the energy spectrum are associated with younger particles and more-recent star formation. But the more-elusive lower-energy radio waves come from star-formation events in the distant past.

The new, novel observations gave scientists two important insights into the history of NGC 4565. First, researchers now know the galaxy is well past its prime. Because the galaxy's halo consists mostly of old particles, the scientists concluded that most of the galaxy's stars formed long in the past — approximately 100 million years ago, the researchers estimated.

Using computer models, the scientists also learned what created this halo: Strong galactic winds pushed the particles toward the galaxy's periphery. Scientists don't know if one specific event created these winds but speculate that they come from a combination of many star-formation events and supernovas, Privon said.

"Finding a radio halo is not necessarily new," Privon said. But getting this kind of a peek into a galaxy's past — that's a step forward in science, he added.