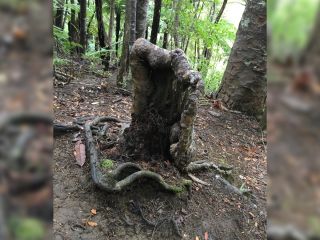 The stump in question looks like the last standing wall of a great ruined fortress. Beneath the soil, it’s still alive.
(Image: © Sebastian Leuzinger / iScience)

In a forest in New Zealand, a vampire clings to life.

Once a mighty kauri tree — a species of conifer that can grow up to 165 feet (50 meters) tall — the low, leafless stump looks like it should be long dead. But, as a new study published today (July 25) in the journal iScience reminds us, looks are only surface-deep.

Below the soil, the study authors wrote, the stump is part of a forest "superorganism" — a network of intertwined roots sharing resources across a community that could include dozens or hundreds of trees. By grafting its roots onto its neighbors' roots, the kauri stump feeds at night on water and nutrients that other trees have collected during the day, staying alive thanks to their hard work.

"For the stump, the advantages are obvious — it would be dead without the grafts, because it doesn't have any green tissue of its own," study co-author Sebastian Leuzinger, an associate professor at the Auckland University of Technology in New Zealand, said in a statement. "But why would the green trees keep their grandpa tree alive on the forest floor while it doesn't seem to provide anything for its host trees?"

Leuzinger and his colleagues tried to answer that by studying nutrient flow through the vampire stump and its two closest neighbors. Using several sensors to measure the movement of water and sap (which contains important nutrients) through the three trees, the team saw a curious pattern: the stump and its neighbors seemed to be drinking up water at exact opposite times.

During the day, when the vibrant neighbor trees were busy transporting water up their roots and into their leaves, the stump sat dormant. At night, when the neighbors settled down, the stump circulated water through what was left of its body. The trees, it seemed, were taking turns — serving as separate pumps in a single hydraulic network.

So, why add a near-dead tree to your underground nutrient highway? While the stump no longer has any leaves, researchers wrote, it's possible that its roots still have value as a bridge to other vibrant, photosynthesizing trees elsewhere in the forest. It's also possible that the stump joined roots with its neighbors a long time ago, before it was, well, a stump. Since nutrients still flow through the stump's roots and into the rest of the network, the neighboring trees may never have noticed its loss of greenery.

However the trees became entwined, their mysterious teamwork is giving Leuzinger and his colleagues reason to rethink the very concept of what a forest is.

"Possibly we are not really dealing with trees as individuals, but with the forest as a superorganism," Leuzinger said.

These forest superorganisms may create added protection from droughts, the researchers speculated, giving trees with less access to water a chance to share resources with their better-hydrated neighbors. That's an especially valuable perk to have now, as the frequency and intensity of droughts are expected to increase around the world due to climate change.

Still, there may be drawbacks to the root grafting, as well. Just as nutrients can be shared swiftly between individuals, perhaps harmful pathogens could just as easily spread from a single infected tree to an entire forest via this underground root network. Kauri trees, in particular, are threatened by a disease called kauri dieback, which spreads through a soil-borne pathogen, the researchers wrote. Will community-mindedness be the downfall of the kauris, or will it be their salvation? Time, and further study of forest vampires, will tell.