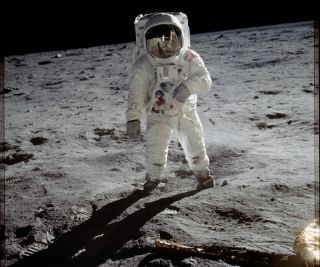 Astronaut Buzz Aldrin walks on the surface of the moon near the leg of the lunar module Eagle during the Apollo 11 mission on July 20, 1969.
(Image: © NASA)

When humans first walked on the moon 50 years ago, they left footprints, a flag and for some, a trail of doubt. While most Earthlings celebrated humanity's great feat, a handful of holdouts just raised their eyebrows and whipped up some bizarre theories. The most famous of these conspiracy theories is that the moon landings were not real, but were staged by NASA.

Though the first moonwalker has died, these conspiracy theories — and others about the moon — live on. Here are some of the most famous moon conspiracies and myths, and here's why they make absolutely no sense.

The Apollo moon landings were faked

About 5% of Americans think the moon landings were completely staged (they were not). These people cite various reasons for this belief, as Space.com previously reported. Why are there no stars in the photos of the moonwalkers? Why is the U.S. flag fluttering? Why are there footprints but no prints from the lunar modules from the landers? [Apollo Moon Landing Hoax Theories That Won't Die]

There aren't any stars in the photo because daylight on the surface washes them out, just like it does on our planet. The U.S. flag is fluttering because it has a metal rod sewn into it to give it the appearance of moving in the "wind." And there are footprints but no impressions from the modules because the weight of the lunar modules was more evenly distributed than the astronauts' weight was in their boots.

"OK," others ask, "don't you need water or some kind of moisture in the soil to leave footprints?" The answer is no, particles of dust can hold various shapes because of the friction between them. And the lunar module that landed on the lunar surface did not leave a deep crater because beneath the dust, the moon is made up of densely packed rock. But the dust and loose dirt on the surface was kicked up, as can be seen in the photos.

Aliens on the moon

The moon is not real, but an alien space station that is used to monitor our planet, according to another conspiracy theory. This came from a website written by a person named Scott C. Waring, who claimed to have found two photos in the NASA Image Atlas in 2013 that have since been deleted.

"The evidence that NASA deleted is not just a UFO, but is also 100% evidence that the moon is not real, but actually an alien space station," he wrote. According to him, the surface of the moon is covered in debris to make it seem like a natural celestial body, but in reality it opens up like a gate and allows spaceships to enter in and out.

This same self-proclaimed UFO researcher also claimed that there was an "alien city" on the "dark" side of the moon. He came to this conclusion after analyzing a photo of the Giordano Bruno crater — a 14-mile-wide (22 kilometer) crater that lies on the far side of the moon. There, he said, he found destroyed or damaged "structures" that could be a hundred million years old. Some of them had reflective roofs and some looked like ships, he explained in a Youtube Video.

NASA dismisses these and other claims of "objects" on the moon as simply mind tricks or a psychological phenomenon called "pareidolia," according to the International Business Times. It's simply like finding an image of a bear in a cloud or Jesus on a piece of toast.

Random things on the moon

This photograph taken by the Lunar Orbiter in February of 1967 shows a mile-high piece of "something" rising from the surface of the moon. NASA conspiracy theorist Richard Hoagland said this should be called the "Shard" and argued that no geological phenomenon can explain it, so it must be artificially made.

It turned out later, however, that Hoagland had processed the image (such as by adjusting contrast and using smoothing filters) so that a spot of light in the image turned into "the shard." [Photos: Mysterious Objects Spotted On the Moon]

Another photo taken during the Apollo 15 moonwalk in 1971 depicts a bright light above astronaut David Scottt's head. This led some people to suggest that maybe it's evidence of alien activity — but experts say it's just a lens flare.

A couple of years ago, rumor had it that the moon would turn green. After all, several of the planets aligned and caused an eerie glow, according to Space.com. This sickly shade was supposed to fall upon the moon on April 20 and May 29 of 2016, allegedly making it the first time the moon has gone green since 1596. Spoiler alert: It didn't.

The moon is made of cheese

The moon is (unfortunately) not made up of cheese, a popular myth or story told to children. If it were made of cheese, that would mean there is a gigantic cow somewhere in the solar system. And in this cosmic game of Where's Waldo?, we probably would've already detected the beast. But then again, space is random and you never know what you'll find, you know?

The moon makes us lunatics or insomniacs

A popular lunar myth holds that a full moon can affect our well-being — it can make us wilder, more likely to give birth, less likely to sleep, more likely commit crimes. Others claim that they just can't sleep on the night of a full moon. Though there are studies aimed at trying to find a link between a full moon and these activities, they have all come up short. For example, a 1985 literature review found that there was no link between the full moon and timing of mental illness, criminal behavior or other such human activities.

The supermoon can cause disasters

A supermoon is when the full moon looks really big because it happens to be on its closest swing by our planet. Because it's closer, it does exert more gravitational pull on our planet than usual, which has led some to theorize that it causes natural disasters.

But supermoons have no effect on disasters such as earthquakes and tsunamis, according to a previous Live Science report. "A lot of studies have been done on this kind of thing by USGS scientists and others," John Bellini, a geophysicist at the U.S. Geological Survey previously told Live Science. "They haven't found anything significant at all."