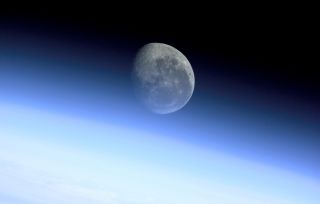 On July 20, 1969, astronauts Neil Armstrong and Buzz Aldrin walked on Earth's moon for the first time in human history. Four days later, they — along with Apollo 11 command module pilot Michael Collins — were locked up on an American aircraft carrier in the middle of the Pacific Ocean.

The triumphant astronauts were in quarantine. Per a NASA safety protocol written half a decade earlier, the three lunar visitors were escorted directly from their splashdown site in the central Pacific to a modified trailer aboard the USS Hornet, where a 21-day isolation period began. The objective? To ensure that no potentially hazardous lunar microbes hitchhiked back to Earth with them. [5 Strange, Cool Things We've Recently Learned About the Moon]

Of course, as NASA quickly confirmed, there were no tiny aliens lurking in the astronauts' armpits or in the 50 pounds (22 kilograms) of lunar rocks and soil they had collected. But despite this absence of literal extraterrestrial life, the Apollo 11 astronauts still may have succeeded in bringing aliens back to Earth in another way that can still be felt 50 years later.

"Today, about 30 percent of the public thinks the Earth is being visited by aliens in saucers, despite the evidence of that being very poor," Seth Shostak, senior astronomer at the SETI Institute — a nonprofit research center focused on the search for alien life in the universe — told Live Science. "I think the moon landing had something to do with that."

Shostak has been searching for signs of intelligent life in the universe for most of his life (and, fittingly, shares a birthday with the Apollo 11 landing). Live Science recently spoke with him to find out more about how the moon landing changed the scientific community's pursuit of aliens and the world's perception of them. Highlights of our conversation (lightly edited for clarity) appear below.

LS: What did the moon landing teach humans about extraterrestrial life?

Seth Shostak: Not too much. By 1969, most scientists expected the moon was going to be dead.

That said, I think the moon landing did affect the public perception of extraterrestrial life. Up until then, rockets and so forth were just science fiction. But the Apollo missions showed that you could travel from one world to another on a rocket — and maybe aliens could, too. I think that, from the public's point of view, this meant that going to the stars wasn't always going to be just fiction. Suddenly, the universe was a little more open.

LS: In 1969, did scientists think there might be aliens somewhere else in the solar system?

Shostak: Mars was the Great Red Hope, if you will, of extraterrestrial life in the solar system. People were very optimistic in 1976 when the Viking landers plopped down onto Mars that there would be life. Even Carl Sagan thought there might be critters with legs and heads running around there. Scientists were kind of disappointed when it didn't look like Mars had much life, either.

If you ask scientists today where's the best place to look for life in the solar system, they'll probably say Enceladus or one of the other moons of Jupiter or Saturn. There still could be microbial life on Mars, but to find it you'll have to dig a really deep hole and pull stuff up. Some of these moons, on the other hand, have geysers that shoot the material right into space, so you don't even have to land a spacecraft to find it.

LS: What did the search for extraterrestrial intelligence (SETI) look like around 1969?

Shostak: Modern SETI experiments began in 1960 with astronomer Frank Drake and his Project Ozma, where he searched for inhabited planets around two stars using a radio telescope. [After four years of searching, no recognizable signals were detected.]

But by 1969, SETI was being done informally by people who were working at telescopes, looking up the coordinates of nearby stars and hoping to pick up radio waves in their spare time. But it wasn't really organized until the NASA SETI program began in the 1970s. It was a serious program that, at one point, had a budget of $10 million a year, so NASA could build special receivers, get telescope time and all that sort of stuff.

The NASA SETI program began observing in 1992 — and, in 1993, Congress killed it! Ultimately, a democratic congressman from Nevada killed it. I find it ironic that a congressman from Nevada — home of Area 51 and the extraterrestrial highway — voted down the NASA SETI program, when they profit more from the public fascination with aliens that anywhere else.