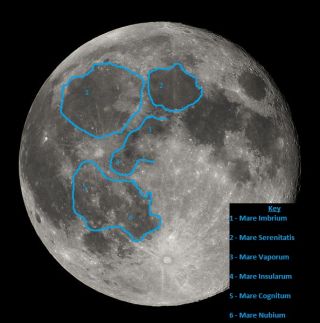 One possible interpretation of lunar surface seen from Earth forming the "Man in the Moon."
(Image: © Creative Commons | Luc Viatour)

During the Apollo missions, the Lunar Orbiter snapped several photos of the area around Archimedes crater, including this one, which was subsequently published in National Geographic. Lunar conspiracy theorists quickly zeroed in on the bottle-shape object toward the bottom of the image, which they said appears to be a platform of some kind. Based on the scale of the photo, the so-called "Archimedes platform" measures roughly 5 miles long and 1 mile wide. What is it?

Close-up of the 'platform'

This NASA image of Archimede's "platform" scanned at a somewhat higher resolution reveals it is just the planar face of a ridge with a fairly steep slope. The shape of the object and the surrounding craters prove this photograph shows the same part of the lunar surface as the photo in the previous slide. But for some reason, lunar conspiracy theorists aren't quite as interested in this picture of the "platform," despite its superior lighting.

NASA conspiracy theorist Richard Hoagland claims this photograph, taken by the Lunar Orbiter in February 1967, shows a mile-high spire rising from the lunar surface in the distance. Hoagland has dubbed it the "Shard," and argues that there is no plausible geological explanation for it, so it must be artificially made.

Close-up of "the Shard"

The star-like object in the image, like others in the zoomed-out image in the previous slide, is the Lunar Orbiter camera's registration mark, according to Hoagland. The irregularly shaped tower below it is the so-called shard.

Original NASA image of "the Shard"

This original NASA image, taken by Lunar Orbiter 3, shows Bruce crater in the foreground and the Sinus Medii Mare plain in the background (the camera looks west). This appears to be the photograph that Hoagland manipulated with image processing software to bring about the appearance of his "Shard." His manipulation - a combination of contrast adjustment, smoothing, and other alterations - appears to have turned a tiny spot of light near the horizon of the moon (perhaps light from a distant star) into a blurry image artifact - the Shard. See the next slide for a close-up on the area of interest.

Digital image processing introduces processing artifacts, not evidence of life on the moon.

This photograph, taken during the Apollo 15 moonwalk in 1971, appears to show a brightly lit object hovering above the astronaut David Scott, leading many to believe that something fishy must have been going on during the Apollo moon landings. However, experts say this is just a lens flare, as glare toward the top of the frame shows the sun is not far above.