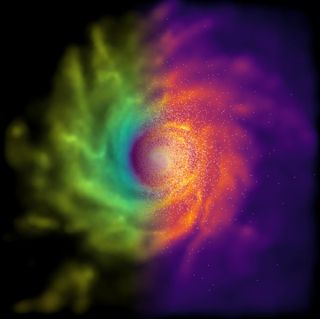 A supercomputer simulation of a disc galaxy. The right-hand side of the image shows the gas density within the disk galaxy, while the stars twinkle as bright dots. The left side of the image shows how forces change inside the gas according to Chameleon Theory, which could explain a discrepancy in our measurements and models of dark energy.
(Image: © Christian Arnold/Baojiu Li/Durham University)

Can a chameleon build a galaxy? According to new computer models, yes.

This isn't a surrealist joke but rather the implication of recent simulations that aim to explain the inner workings of dark energy, a mysterious force that is driving apart everything in the universe. The findings, published July 8 in the journal Nature Astronomy, lend support to a model of dark energy known as Chameleon Theory.

Hints of dark energy were first discovered in the late 1990s, when cosmologists measured the light from distant supernovas and realized that the stars were dimmer than expected, suggesting that the fabric of spacetime was not only expanding, but accelerating in its expansion. Physicists proposed the existence of a force that worked in opposition to gravity, pushing things away from one another, rather than pulling them together. [The Biggest Unsolved Mysteries in Physics]

Most researchers subscribe to the idea that dark energy is what's known as the cosmological constant, a type of energy pent up in the vacuum of space itself, Baojiu Li, a mathematical physicist at Durham University in the United Kingdom, told Live Science. "This simple model works very well practically, and it is a straightforward addition to the cosmological model without having to modify the law of gravity," he said.

The problem is that leading physics theories predict that the value of the vacuum's energy should be 120 orders of magnitude higher than what cosmologists observe from actual measurements of dark energy in the universe, said Li. So physicists have sought out alternate explanations, including Chameleon Theory.

The theory proposes a new force, atop the four already known, mediated by a particle called the chameleon particle, according to an explainer in Sky and Telescope magazine. The chameleon force would act like dark energy, driving apart galaxies in the cosmos. But having an unexpected fifth force comes with its own dilemma — how come our instruments have never before seen such a particle?

The theory suggests that chameleon particles, like their reptilian namesakes, can blend into their surroundings to evade detection. Rather than changing color, these particles change mass. In high-density environments, such as that near Earth, they have a high mass and are therefore difficult to detect. This is why we don't see the effects of chameleon particles on our solar system, but rather only on extremely large cosmological scales, where, overall, matter is sparse, according to the theory.

In order to test Chameleon Theory, researchers have run powerful computer simulations, spinning virtual dark matter — an as-yet-unknown substance vastly outweighing visible matter in the universe — with the four known forces plus chameleon particles to create celestial structures like our solar system, according to a statement.

But until now, processing-power limitations have meant that the models could not include ordinary, visible matter, like protons and electrons. Li and his colleagues used supercomputers to finally include the ordinary particles alongside everything else and produce galaxy-scale structures.

"The simulations show that realistic galaxies, like our own Milky Way, can form despite the complicated behavior of gravity in [Chameleon Theory]," Li said.

The team hopes further modeling will reveal ways to distinguished the theory from other hypotheses about dark energy, he added.

So do these ideas challenge Einstein's theory of general relativity, as has been widely reported?

"Challenge is a strong word," Jeremy Sakstein, a physicist at the University of Pennsylvania in Philadelphia who was not involved in the work, told Live Science.

To test general relativity, it's useful to have competing theories, he added, and this new research represents a step toward making predictions about what these alternatives might see on cosmological scales.