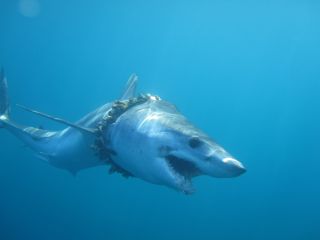 Sharks and rays are getting entangled in plastic pollution. Here, a mako shark in the Pacific Ocean has become entangled by a fishing rope, which is causing scoliosis of the back.
(Image: © Daniel Cartamil)

You've seen the heartbreaking video of the turtle with a straw caught in its nose, and you've heard about fish pumped with microplastics. But there are bigger casualties of the plastic problem, according to scientists. Sharks and rays are also suffering as a result of plastic pollution.

Scientists counted more than 1,000 documented instances of sharks and rays becoming tangled in our plastic debris in a recent study published yesterday (July 4) in the journal Endangered Species Reports. The actual number is probably much higher — this study only included mentions of entanglement in scientific journal articles and on Twitter. Sharks and rays are at higher risk of extinction than most other animals, according to the International Union for Conservation of Nature (IUCN), with only 23% of species classified as "least concern." [In Photos: Great White Sharks Attack]

Plastic isn't the main threat to the species — overfishing poses a greater one. But plastics do nothing to help an already bad situation.

Daniel Abel, a marine biologist at Coastal Carolina University, has witnessed the devastating consequences of plastic pollution. In 2016, while conducting research in Winyah Bay, South Carolina, Abel and his students pulled on board a sandbar shark that had become badly entangled in plastic packaging twine. The plastic had sliced a ring all the way around the shark's body, horrifying the researchers.

"It was abhorrent to us," Abel told Live Science.

Over the years, Abel has seen an increasing number of sharks that carry signs of damage from human gear, including plastic. The sandbar shark Abel pulled aboard did survive — Abel's team was able to free it from the twine cutting into its skin. But according to Abel, not all sharks are this lucky. Another month or two, and the twine would have eventually cut this particular shark in half, he added, killing it slowly and painfully.

Entanglement isn't a new problem, said Chris Lowe, the director of the Shark Lab at California State University, Long Beach. It's as old as plastic pollution itself. But as plastic builds up in the ocean, the rate of entanglement will only increase. So it's more important than ever to quantify the issue, he added.

But until now, science hasn't fully acknowledged the threat posed to sharks and rays by plastic debris, said Brendan Godley, a shark researcher at the University of Exeter in England, and lead author of the study. That's partly because of the focus placed on overfishing and by-catch — when sharks are accidentally caught in nets and lines.

"The issue of entanglement has perhaps gone a little under the radar," Godley said in a statement.

But there is hope, according to Lowe. With the recent focus on eliminating single-use plastic, he's already started noticing less plastic buildup in the oceans.

The problem isn't going to go away instantly, Lowe said. But "if we have the will, we can stop this," he told Live Science.