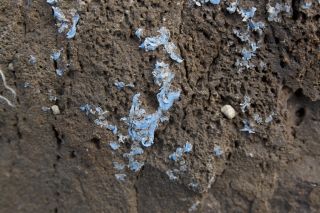 A new type of plastic pollution has become encrusted onto these rocks on the Portuguese island of Madeira. Local sea snails (pictured here) may be eating it.
(Image: © Ignacio Gestoso)

Plastic pollution is fast becoming a fixture of Earth's oceans, present everywhere from the deepest trenches to the guts of sea birds soaring over the waves. Now, a forthcoming study in the October 2019 issue of the journal Science of the Total Environment shows that a new type of marine plastic pollution could soon paint the world's beaches flaky blue.

The study authors call this previously unknown type of pollution "plasticrust" — essentially, flecks of crusty, blue and white plastic hardened onto the rocky surfaces where the land and sea meet. [10 of The Most Polluted Places on Earth]

While recently surveying the beaches of Madeira, an island in the Atlantic Ocean southwest of Portugal, the researchers found that distinct chunks of plasticrust coated roughly 10% of the rocks they surveyed. This was a significant increase in plasticrust coverage compared to a previous research trip on the island just three years earlier.

A chemical analysis of the crusts revealed that they were made of polyethylene, an extremely common plastic often used in single-use containers.

"It is likely that 'plasticrusts' are probably originated from packaging materials (e.g., single-use plastic bags) but further testing is needed for confirmation," the authors wrote in their study.

Lead study author Ignacio Gestoso, a marine ecologist at the MARE-Marine and Environmental Research Center on Madeira, told Earther.com that the crust likely resulted from large pieces of plastic crashing against the shore over time, gradually accumulating on the rocks like algae.

Unfortunately, also like algae, the crust might already be making its way into the marine food chain, thanks to a species of hungry little sea snail called Tectarius striatus. The mollusk usually feeds on the algae on oceanside rocks, but Gestoso and his colleagues found the snails crawling over nearly as many plasticrust-coated surfaces as non-polluted ones.

It's not clear if the snails were "grazing" on the plasticrusts, the researchers wrote, but the possibility can't be discounted as prior studies have found similar species of snail unable to distinguish clean algae from microplastic-covered algae. If snails are indeed taking in a bit of plasticrust with their supper, this could represent a novel way that microplastics enter into the marine food chain, Gestoso and colleagues wrote.

While the phenomenon of plasticrust has so far been observed on only one island, it is, sadly, not the first new form of plastic-sediment-hybrid gunk to appear on beaches in recent years. In 2014, researchers in Hawaii noticed that plastic trash, melted by campfires, had combined with tiny beach rocks and lava fragments to form a new type of rock that they called a "plastiglomerate." These trash-rock chimeras are likely present on beaches all over the world, the researchers found, and may etch our current era of plastic pollution into Earth's geologic record.