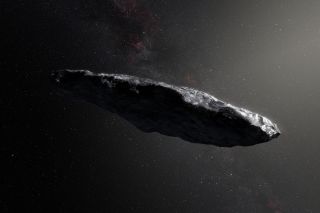 When the solar system's first-known interstellar visitor was spotted on Oct. 19, 2017, scientists scurried to observe the strange object. The oddly shaped, rapidly moving traveler had been ejected from its home system and was perhaps a comet or asteroid, or even a chunk of a shredded planet. One pair of scientists even suggested that it could be an alien spacecraft.

"We have never seen anything like 'Oumuamua in our solar system," Matthew Knight, an astronomer at the University of Maryland and first author on a new paper about the mysterious object, said in a statement. "It's really a mystery still."

Knight was part of the 'Oumuamua International Space Science Institute (ISSI) Team, a group that examined all of the observations and studies of the passing visitor. The scientists concluded that aliens are not needed to explain 'Oumuamua, as a natural explanation satisfies the observations. Their study was published today (July 1) in the journal Nature Astronomy.

'Oumuamua's rapid speed meant that astronomers had only a few weeks after it was first spotted to collect as much data as possible. Their observations revealed that the object was small and red in color. The object also seemed to have a cigar-like shape and an unusual spin, as well as a strange change in direction that has been a challenge to explain.

"The motion of 'Oumuamua didn't simply follow gravity along a parabolic orbit as we would expect from an asteroid," Knight said.

Jets of gas could gently push the traveler, providing a potential explanation for its change in spin and direction. But astronomers didn't spot any sign of material shooting out of the elongated object that would match current models of cometary jets.

"Either the jet model in that study did not capture how 'Oumuamua's jets actually worked, or we need to throw the whole jets idea out of the window," Sean Raymond, a member of the ISSI team and co-author on the paper, wrote in his blog. "The alien-spacecraft camp threw the jets model out of the window."

According to Raymond, these scientists may have tossed out jets too soon.

"How comets' spins change due to outgassing is an active area of research," Raymond wrote. "And it's more complicated than you might think."

Another model suggesting that the cometary object would have lost about 10% of its total mass as it passed the sun reveals a spin that matches what was observed with 'Oumuamua. According to Raymond, that theory may or may not be correct, but it "clearly shows that comet-like outgassing can explain 'Oumuamua's nongravitational acceleration and spin at the same time."

It's also possible that pressure from solar radiation could have affected the spin. If 'Oumuamua was only a few millimeters thick, it could work as a lightsail, pushed along by starlight. But if the interstellar traveler was an alien star sail, it shouldn't have a spin, instead keeping one face constantly pointing toward the sun.

The scientists who suggested that the object could be an alien spacecraft also argued that the lack of similar natural objects in space suggests that 'Oumuamua should never have been discovered, and may therefore have been deliberately aimed at Earth. Similarly, its unlikely orbit sent it closer to Earth than any other planet, a so-called special orbit that suggests it may have sought us out.

Knight and his colleagues argued that, while simulations suggest how much material — roughly one Earth-mass — gets ejected during planet formation, the true amount of debris ejected during these events remains unknown: It could be a few large objects or many smaller ones. Some estimates suggest that roughly two extrasolar objects pass by the sun each year. Knight also pointed out that small, faint objects like 'Oumuamua should constantly breeze through the solar system but are often too faint to be visible. These items can only be spotted when they are near our planet.

"'Oumuamua's orbit is completely average when compared with detectable interstellar objects," Raymond wrote. "The ones we could find are mostly on 'special' orbits."

What about the strange elongated shape of the visitor? "The thing is, we don't know 'Oumuamua's actual shape," Raymond wrote. Researchers only had a limited time to observe the faint fleeing object. While it could look like a cigar, it could also bear a strong resemblance to a pancake.

Even a cigar shape could have a natural explanation. 'Oumuamua could be a fragment of a larger object shredded before it was ejected, a process that stretched it out. Slow collisions with objects in its home system could have produced its bizarre shape. Or the fast-traveling dust between the stars could have crashed into the visitor, carving out an elongated cigar. Or it could be something else entirely.

If 'Oumuamua isn't an alien spacecraft, what might it be?

"There is no universally accepted answer, but signs point toward 'Oumuamua being similar to solar system comets," Raymond wrote. Comet-like objects are constantly tossed out of their systems by large planets and passing stars. A full-size comet or cometary fragment would fit with the appearance and acceleration of 'Oumuamua, according to the researchers.

"It is possible that some of 'Oumuamua's weirdnesses are simply due to its small size," Raymond wrote. He added that the properties of very few similarly sized objects in the solar system are known because their small size and faintness make them a challenge to observe.

"Signs point to 'Oumuamua being a natural object. Maybe something similar to a comet," he wrote. "But no aliens."

As telescope technology continues to increase, astronomers anticipate spotting more interstellar visitors. The Large Synoptic Survey Telescope (LSST), currently under construction in Chile, may help to reveal many of these, once the instrument sees first light in 2022. While observers won't catch a glimpse of 'Oumuamua again, they will be able to spot other interstellar visitors.

"We may start seeing a new object every year," Knight said. "That's when we'll start to know whether 'Oumuamua is weird or common."

If the interstellar visitor resembles other travelers, then it would most likely have similar origins. Only if it was dramatically different from the majority of visitors might scientists begin to consider more fantastic origins.

"If we find 10 to 20 of these things and 'Oumuamua still looks unusual, we'll have to reexamine our explanations," Knight said.