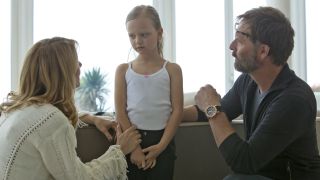 On the HBO series "Big Little Lies," Amabella Klein had a panic attack while learning about climate change. She has good company; psychologists say this type of "eco-anxiety" is surprisingly common.
(Image: © Hilary Bronwyn Gale/HBO)

When news about the environment becomes grim, you might be overcome by an urge to hide or collapse.

On last week's episode of HBO drama "Big Little Lies," 9-year-old Amabella did both. The character's metallic boots were found sticking out of a classroom closet following a lesson on climate change, and the internet collectively nodded in recognition.

It turns out that anxiety, grief and despair about the state of the environment is nothing new. It even has a name: eco-anxiety. And according to psychologists, it's incredibly common. [Hypersex to Hoarding: 7 New Psychological Disorders]

According to a Yale survey conducted in December 2018, 70% of Americans are "worried" about climate change, 29% are "very worried" and 51% feel "helpless." Despite these striking statistics, most people don't realize how widespread eco-anxiety is, one psychologist told Live Science.

"[Ecoanxiety] is often hidden somewhat under the surface," Thomas Doherty, a clinical psychologist based in Portland, Oregon, told Live Science, "people aren't taught how to talk about it."

Still, over the past decade, eco-anxiety has gained increasing recognition from scientists and non-scientists alike. It's not listed in the Diagnostic and Statistical Manual, psychology's list of official diagnoses. That's partially because its symptoms are poorly defined, said David Austern, a clinical psychologist at NYU Langone Health. The American Psychological Association defines it as "a chronic fear of environmental doom." Eco-anxiety can range from day-to-day worry about the fate of the world, to Amabella's outright panic attack. Depending on whom you ask, it can even include the fear and panic attacks some natural disaster victims experience after the fact, Austern said. Its symptoms are largely the same as any other kind of anxiety; its only distinguishing factor is its cause, Austern said.

But that doesn't mean that psychologists aren't taking eco-anxiety seriously. In 2008, the American Psychological Association established a climate change task force. And in 2017, they published a 70-page report on the mental-health effects of climate change. This year, at their annual conference in Chicago, there will be four climate change related sessions.

A term like eco-anxiety, though nebulous, is important to create recognition for a very real phenomenon, Austern said. It helps people express what they're experiencing.

Psychologists agree it's important to open up a dialogue about the mental health effects of climate change. But they also agree that in most cases, eco-anxiety isn't a bad thing.

"It's a rational reply to a really serious problem," Maria Ojala, a psychologist at Örebro University in Sweden, told Live Science. That, she says, is why it could be dangerous to make it a clinical diagnosis.

"We have to ask, Is it more pathological for someone to be so worried about climate change or is it actually more pathological that people are not more worried about it?" Austern said. Anxiety is precisely the emotion that'll propel us to do something, he added. Conveniently, taking action Is also one of the most effective coping mechanisms for eco-anxiety, Ojala said.

But anxiety is only good for sparking action up to a certain point, Doherty said. A tenet of psychology, the Yerkes-Dodson law, holds that up to a certain point, arousal — how alert or worried you feel — leads people take action and perform better. But overly high levels of anxiety can become paralyzing. For example, one study described cases in which fear of extreme weather approached the level of phobia. Depending on how anxious you are, that's either incredibly convenient, or presents a catch-22 situation.

In these cases, anxiety becomes counterproductive to climate action, Doherty said, And it's important to seek help. Luckily, if you're too anxious to take action, fostering a sense of connection with one's environment and community can also help with symptoms. A recent study found that 2 hours per week in nature is enough to reap mental health benefits.

Despite its prevalence, eco-anxiety still goes under-recognized. It shouldn't be, Doherty said. "This 'Big Little Lies' episode clearly struck a chord with people," Doherty said. And that's a sign, he added, of how important a conversation this is to have.