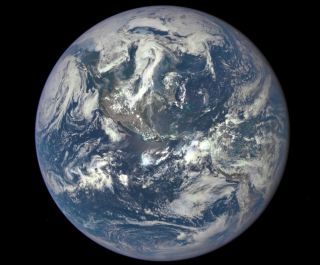 A NASA camera on the Deep Space Climate Observatory satellite captured its first view of the entire sunlit side of the spherical planet Earth, on July 6, 2015.
(Image: © NASA)

The amount of carbon dioxide that humans will have released into the atmosphere by 2100 may be enough to trigger a sixth mass extinction, a new study suggests.

The huge spike in CO2 levels over the past century may put the world dangerously close to a "threshold of catastrophe," after which environmental instability and mass die-offs become inevitable, the new mathematical analysis finds.

Even if a mass extinction is in the cards, however, it likely wouldn't be evident immediately. Rather, the process could take 10,000 years to play out, said study co-author Daniel Rothman, a geophysicist at the Massachusetts Institute of Technology. [7 Iconic Animals Humans Are Driving to Extinction]

However, slashing carbon emissions dramatically in the coming years may also be enough to prevent such global catastrophe, said Lee Kump, a geoscientist at Pennsylvania State University who was not involved in the study.

All these major extinctions have one similarity.

"Every time there's been a major mass extinction — one of the big five — there's been a serious disruption of the global carbon cycle," Rothman said. It could be a direct link between CO2 and death due ocean acidification or an indirect link, as carbon dioxide emissions can warm a planet to unlivable temperatures and have even been linked with volcanic eruptions and the related cooling of the atmosphere.

For instance, at the end of the Permian period, about 252 million years ago, ocean carbon dioxide levels skyrocketed, marine rocks reveal. (Carbon dioxide that is in the air gradually dissolves into the ocean's surface and eventually enters the deep ocean.)  However, carbon doesn't always equal assured doom for the planet. It's possible that a change in carbon levels in the atmosphere and oceans are markers for rapid environmental change, which could be the underlying cause of extinctions. In addition, rocks from the past reveal many other "carbon excursions" — or rises in atmospheric or ocean levels of carbon — that did not result in mass extinctions, Rothman said. [Ocean Acidification: The Other Carbon Dioxide Threat]

So what distinguishes the deadly carbon excursions from the ones that don't cause mass dying?

In the new study, which was published Sept. 20 in the journal Science Advances, the scientists assumed that two factors may play a role: the rate at which carbon levels increase, and the total amount of time that change is sustained, Rothman said.

To calculate those values, Rothman looked at data on carbon isotopes, or versions of the element with differing numbers of neutrons, from rock samples from 31 geologic periods over the past 540 million years. Determining the length and magnitude of rises in atmospheric carbon can be tricky because some periods have thorough rock samples while others are sparsely represented, Rothman said.

From that data, Rothman and his colleagues identified the rates of carbon change and total carbon input that seemed to be correlated to extinctions in the geologic record. Then, they extrapolated to the present day, in which humans are adding carbon to the atmosphere at a furious rate.

Rothman calculated that adding about 310 gigatons of carbon to the oceans was enough to trigger mass extinctions in the past, although there is huge uncertainty in that number, Rothman said.

"Most every scenario that's been studied for how things will play out, as far as emissions are concerned, suggest on the order of 300 gigatons or more of carbon will be added to the oceans before the end of the century," Rothman said.

What happens the day after that threshold is reached?

"We run the risk of a series of positive feedbacks in which mass extinction could conceivably be the result," Rothman said.

Of course, those effects wouldn't be felt immediately; it could take 10,000 years for the die-off to result. And there's a lot of uncertainty in the estimates, Rothman added.

"I think it's a really useful approach, but there are always limitations when we're working in deep time," Kump told Live Science. "One of the limitations is that Rothman had to accept the state of our understanding of the timing and duration of these disturbances."

But even with that uncertainty, "clearly the rate of fossil fuel burning today rivals, if not exceeds, the rate of carbon cycle perturbation in the past" associated with mass extinctions, Kump said.

Because the rate of carbon rise is so steep currently, the best option for preventing eventual catastrophe is to ensure the duration of the carbon increase is short, he said.

"If we can rein ourselves in, we can avoid the Permian catastrophe," Kump said.