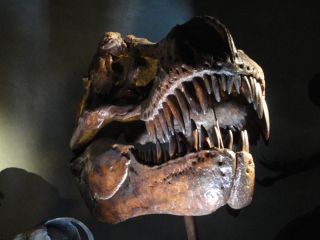 Unlike this T-Rex, humans can see the next mass extinction coming.
(Image: © © Howard Hughes Medical Institute)

From the space rock that killed the dinosaurs to the supervolcanoes that wiped out nearly 90 percent of the world's species, mass extinctions have occurred a handful of times throughout Earth's history. And if humans aren't careful, the planet may be due for another one.

"It's the ultimate destiny of every species to go extinct," said Anthony Barnosky, a paleontologist at the University of California, Berkeley. Barnosky is one of the scientists featured in a new Smithsonian Channel special called "Mass Extinction: Life At The Brink," premiering Sunday (Nov. 30) at 8 p.m. ET (check local listings).

There have been five mass extinctions in the last half-billion years, Barnosky, author of the book "Dodging Extinction" (University of California Press, 2014), told Live Science. [Wipe Out: History's Most Mysterious Extinctions]

The dinosaurs met their end when a giant 6-mile-wide (9.7 kilometers) asteroid or comet smacked into Earth in the Gulf of Mexico 66 million years ago, igniting fires and pumping ash and sulfur into the atmosphere, blocking out the sun. The impact caused about 71 to 81 percent of all species — including nonavian dinosaurs — to go extinct, though some scientists say dinosaur populations had been on the decline already for millions of years.

Before the reign of the dinosaurs, there was an even more deadly extinction at the end of the Permian Era, 252 million years ago. This one was triggered by massive volcanic eruptions, which produced enough lava to bury an area the size of the continental United States under 1,000 feet (305 meters) of lava, changing the chemistry of the atmosphere and the ocean. As much as 97 percent of species on Earth went extinct in the event, aptly named the Great Dying.

While the triggers of these deadly events have been different, they all have some things in common: changes in climate, and changes in atmospheric and ocean chemistry, Barnosky said.

"Those changes were rapid compared to what was normal, and that's exactly the same thing that's going on today," Barnosky said. "Today, we are very clearly at the beginning stages of a 6th mass extinction."

Humans have wiped out half of the world's wildlife population in the past 40 years, and fished out 90 percent of the planet's big fish, Barnosky said. "If we kept that up, we'd be destined to see the loss of about 75 percent of species we're familiar with within a couple of centuries," if not sooner, he added.

Barnosky doesn't think human beings will go extinct as a result of what we're doing, but rather our current way of life may not survive. Humanity depends on many other species, and their loss would lead to societal conflicts and economic crashes, Barnosky said. Furthermore, when mass extinctions happen, biodiversity crashes, and it takes hundreds of thousands of years for ecosystems to return to pre-crash levels.

But there's still hope. Only about 1 percent of the species on the planet have been lost in the past 12,000 years. And unlike the dinosaurs, humans can see the extinction coming and prevent it, said Sean Carroll, a biologist and science communicator at the University of Wisconsin-Madison and the Howard Hughes Medical Institute.

Barnosky agreed. "Most of what we want to save is still out there to be saved, but we have to do things differently," he said.

First of all, society needs to confront climate change, which is subjecting many species to conditions they have never faced before, Barnosky said.

Secondly, he said, humans need to stop converting animal habitats to suit our own needs. Already, people have transformed about half of the planet's land to support humans, primarily for agricultural uses.

And lastly, humans need to start putting an economic value on nature. "We have to view nature as an investment account, where we don't touch the principal, and we live off the interest," Barnosky said.

Barnosky thinks that, if the message gets across to enough people, humanity could avert the coming catastrophe. "I'm guardedly optimistic," he said.