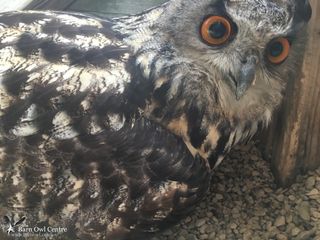 Vincent Jones said he suspected Kaln was also surprised to have laid an egg.
(Image: © The Barn Owl Centre)

An eagle owl named Kaln lived for 23 years at a sanctuary in Gloucester, England. For that whole length of time, its handlers thought it was a male. Then, according to Vincent Jones, founder and trustee of the sanctuary, it laid an egg.

The egg wasn't fertilized, Jones told Live Science, so Kaln won't get to mother a chick. But still, it was a big surprise to all of Kaln's handlers.

"I think he was just as shocked as we were," Jones said. [Photos: Salmon-Eating Owls Revealed in Stunning Images]

Sexing owls is tricky, because males and females outwardly have more or less identical bodies, according to a study published Jan. 24, 2008, in the Journal of Heredity. Unlike mammals and other creatures, there's no obvious difference even between their genitals.

Typically, according to the National Aviary, Eurasian eagle owl females lay up to six eggs across a month-long period in late winter. [Whooo Knew? 10 Superb Facts About Owls]

Kaln never did that though in his 23 years at the sanctuary, Jones said.

"He's always shown signs of being a male," Jones added.

Many of the male birds in the sanctuary "imprint" on their human handlers and treat them as mates, he said. And during breeding season, "Kaln always wants to bonk everything," he said.

Even genetic tests don't always show a clear distinction between male-sexed owls from female-sexed owls in many species, according to that 2008 paper. Female-sex birds have Z and W chromosomes, while male-sex birds have two Z chromosomes. But those chromosomes can be similar enough that they're difficult to distinguish. The authors of that paper specifically tried to distinguish the genes of male and female Eurasian eagle owls and failed.

The larger concern is that around the same time the bird laid its egg, it began acting "depressed" and displaying some health issues that turned out to be unrelated.

Today (June 27), however, Jones said that Kaln has seemed more active and upbeat.

"And that's what really matters isn't it? The health of the owl," Jones said.